Need a gut check on your life thus far? 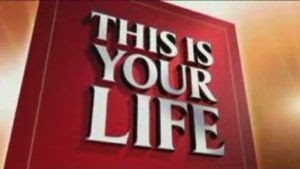 Have a going away party.

When you go through your Facebook friends slash brain to be sure you have everyone included it’s a simple process of see name, think about person, invite or cut off from life entirely (Wait. Sorry. That’s the process of determining who to inform that you have a new cell phone number, which I also did last week).

But when you see those people gathered to say goodbye as you embark on a new phase of life in a city 3K miles away it becomes much more than a “let’s have a drink.” Each person is like a flood of memories/thoughts/mistakes/successes that can’t separated from the whole experience of your time in the city and yet, in many circumstances, don’t know about each others’ existence.

Meredith who co-founded Effable Arts, the theater group that produced my first play has no idea that David, sitting at the bar, was the person who made me get serious about the blog that Meredith’s co-founder Kim found on Facebook, started following, showed Meredith, and decided should become some form of play. And neither of them know Andrew, my good friend from Florence, who inspired a character in that play . Andrew doesn’t even know about that. (Well. Didn’t.) Without Dave there would be no Meredith, and without Andrew what resulted would be wildly different.

It’s a mind trip. You sit there like this puppet master with no control of the puppets – like an audience member in the scene you’ve been acting in for 5+ years (though there were people there who I’ve known for 26).

And then – to make matters all-the-more bizarre – everyone gets drunk and monologues at you about what you mean to them, what you’re about to experience in LA, and precisely what they think about that.

The whole concept of world’s colliding is nerve-wracking in and of itself, but when those worlds are colliding in your honor it becomes…overwhelming? awkward? And yet also gratifying, heartwarming, and the like. It’s hard to describe and, while incredibly significant to experience, I can’t quite recommend moving away just so you can have a going away party. (But if you do that, I won’t judge).

I was a lot of things at my Farewell to NY – nostalgic about the past, grateful for the effort people made to attend, nervous that everyone was having a good time. But mostly, I was proud. Proud of the scene, proud of the memories, proud of what we all accomplished here together.

Last Wednesday night was the first time I saw exactly what I’m leaving gathered in one room (aside from this Friday when that room will be filled with my family, but I intend to be medicated for that). I was sad. Very sad. I am by no means done with New York or itching to leave any of the people in it. But what got me through the night with little-to-no tears was the fact that everyone in that room said, “go.” We’re excited for you, we believe in you, we think this is right for you, we know you’re going to be just fine.