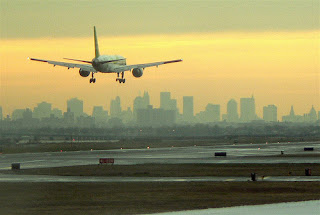 This is an incredibly difficult letter for to write.
Not because I’m writing from the center seat, coach, of my one-way flight to Los Angeles. Not because I’m two complimentary bottles of champagne into said flight (note to world: if you tell the flight attendants that this is the flight that moves you from the east to west Coast, they’ll give you a free bottle of champagne. If you cry when you tell them, they’ll give you two). And not because I’m a girl woman girl, and you’re a city.
It’s difficult because it marks a moment in time – my departure – that makes me reflect back on so many moments in our time – our five years together – that make me need to somehow say, “thank you, it was _______________.”
Just so we’re clear – I never wanted to leave. If it was up to me Hollywood would be in Manhattan and the financial capital of the world would be Los Angeles. Or worst case scenario Boston would be Los Angeles so I could Bolt Bus back for Sunday brunch at Café Cluny. But unfortunately what I need to do right now is 3K miles away. That doesn’t change how I feel about you, of course. I used to tell people that I was most myself in Manhattan – that you were the place I felt most energized, most grounded, most challenged, most appropriately dressed… But for right now, we have to take a pause.
Someone recently asked me why I didn’t make the move to LA right after college if the entertainment industry was always such a passion. I told them that I knew I wanted to spend my early 20’s in Manhattan. “Why?” they said. “If you have to ask,” I explained, “then you wouldn’t understand.”
Five years is not a long time in the grand scheme of things, but the five years from 21 to 26 are like dog years. My first apartment with my first random Craiglist roommate. My first job, then my first second job, then my first third job. My first overdraw of a bank account. My first opening of an IRA. My first all-nighter that didn’t involve a double-spaced paper.
I don’t consider myself a grown-up, but I do believe I grew up in New York, and not in the sense that ever other girl from Jersey does. I realized who and what it was I wanted to be during my time in Manhattan, and much of that I realized because of my time in Manhattan. You’re not one for wishy-washy, uncertain wallflowers, and so you brought out the gut-going, certain, center-of-the-dance floor in me.
For now, I have to say goodbye, but that’s the least important thing of all the things I need to say. I need you to know that you were the place that I became the version of myself that’s lead to the exciting things to come. Ironic, I know, because it’s that version that’s decided she has to leave, but it’s like I told my Mom, as much as you made me this girl who has to embark on this journey, you’ve also made me the girl who knows she’ll come back.
Back for the energy and the inspiration and the grit. Back for the way-too-high rent for the way-too-small apartments, way too many flights up. Back to run in heels along cobble-stoned streets in sub-zero weather. Back to sweat it out in Central Park on a blanket as close to the softball diamond as possible. And back to afirm that it’s not about that “if you can make it there, you can make it anywhere,” claim – it’s about choosing to make it there – whatever it is you decide you want to make.
I couldn’t have done it without you, New York. And even if I could, I wouldn’t have wanted to.
So – because I’ll never be able to say everything I want to say, I’ll leave at this:
Thank you, New York, it was perfect.