Dating Rules From My Future Self, or the total lack thereof

Guest Blogger: Older, Wiser, But Still So Youthful: On the Eve of Thirty-One

How The Naked Spa Changed My Clothed Life 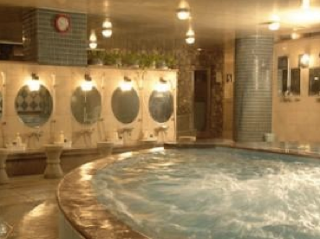 If you’ve lived in L.A. for any longer than 6 month and are a woman, you’ve heard of the “naked spas.”

Less than six month into my own L.A. life I started hearing people swear by the naked spa. The scrub is like nothing you’ve ever experienced! The hot huts are absolutely amazing! The green tea pools will change your life! And these reviews were coming from a wide range of women, not just my Korean friends (hi Annie!).

Now here’s where this gets personal. I am one of four girls and a generally not modest person, but I don’t spent a lot of time naked in large groups. There was this one time in college involving a game of strip flip cup and…nevermind (right Carly!?). Let’s just say that walking around in my birthday suit isn’t something with which I have a ton of experience. And because of that lack of experience, the whole thing made me super nervous. About what, exactly, I couldn’t tell you. It’s not like I thought people were going to reach out and touch my lady parts, or that those parts would be wildly different from all the other parts in the place. I think I just didn’t know what it would be like, and so my instinct was fear.

Luckily my fear of missing out tends to outweigh my fear of all else (see also: going on the Tower of Terror, getting my nose pierced, and that night with the 99Berries Vodka). I wasn’t going to miss out on the much-hailed benefits of the deeply rooted Korean spa tradition just because you have to flash your ta-tas to get it. I am a liberated woman. I can commune with other liberated women in a very small space wearing absolutely nothing. What’s so weird about that?

I cannot explain this phenomenon, but when I think about going to that naked spa while outside of the naked spa, I still get super nervous. It’s like the idea of it is so much worse than the actual experience. I know that now because I am fully and completely addicted to the naked spa. I love being naked in there! It’s so freeing and calming and somehow it makes me feel like one with all the females of the earth (they don’t sell cool-aid but whatever’s in the green tea has the same effect). And while this makes absolutely no sense, I actually feel clothed when I’m naked at the naked spa. Or, hm, maybe I just don’t feel anything at all? I don’t know, but I don’t feel naked. I feel like we all have these skin suits and they all look completely different, and that’s both fascinating and beautiful but not at all embarrassing.

Case in point: in order to get the INCREDIBLE scrubs that they do to remove dozens of layers of skin off your dirty body (don’t knock it ’til you’ve had it), you have to lay on a rubber massage table, buck naked, as a terrifying Korean woman wearing disconcertingly sexy black underwear scrubs every crevice of your body. Right now as I was typing that, I got chills. I have a scrub booked for next week, and right now I want to cancel it. That’s how weird it feels to think about getting that scrub while outside of the chamber that is the naked spa. Inside the naked spa it’s like, whatever! I don’t even think about it. I get up on that table wearing nothing but a smile on my face and lay there thrilled to pieces for all 35 minutes of the blissful experience. I’m like an alternative version of myself on that table, a version that realizes bodies are bodies and parts are parts and all the Korean woman cares about is delivering you a skin-removing experience that will make your body feel like a wet-down slip-in-slide.

So I think what I’m saying is, go be naked among other people at a Korean spa for a few hours! Or, I guess, if you can’t do that, go do whatever else it is you’re afraid to do for reasons that you can’t explain. If it involves nudity you probably want to be sure it’s in a safe, legal place with other people over 18 present, but I’m not the expert on group nudity…yet! (just kidding Mom).

*For you L.A. folk, my current favorite is Crystal Spa inside the new K-Town Mall. They also have a great grocery store and cosmetics store in the same complex. Check it out!