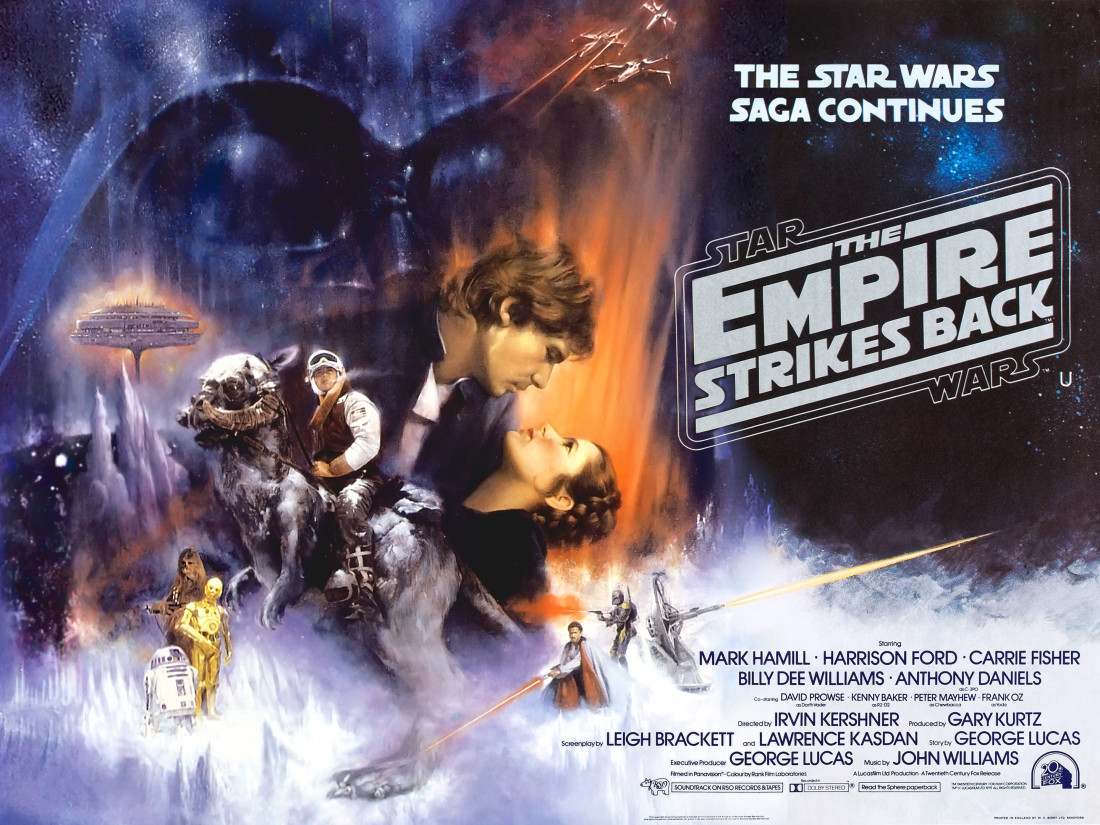 As you know from last week’s post, I lied to R about seeing the Star Wars and then promised to watch all three original films before the new one blesses the world with its arrival this Friday. Spoiler alert: I finished!

Here is the recap on Episode V or film three or The Empire Strikes Back (or R’s favorite). To clarify something in my write-up from last week: yes I did think this movie was called the Emperor Strikes Back. In fairness that is kind of what he does, but we’ll save the note-giving for later in this film.

Some more things to know right off the bat:

Now Han/Chewie + Luke are officially part of the rebel cause on account of they almost died for it in the last movie.

I’m unclear on whether or not everyone knows that Luke has the force or whether or not they care. No one else seems to talk about the whole Jedi situation besides Luke + Ben/Obi who is now just a hologram so I’m wondering if it’s all in Luke’s head? Is this another religious reference? If so I think we need to rethink hating George Lucas because this shit is sophisticated.

This Movie Is About Four Things

1. Luke training with Yoda to become a true Jedi (maybe)

2. The rebels (but mostly Luke) destroying the Empire once and for all (or until the next movie)

3. Darth turning Luke to the dark side (because he knows Luke has the force)

They’re not going to be there for long because the Empire has sent these probe things to find them, which are essentially drones, so Star Wars invented drones.

All you need to know about those entire 20 minutes on Hoth is that Luke almost dies doing snow patrol but Han saves him again (officially making Luke the Peeta to Han’s Katniss), Luke sees a vision of Obi who tells him to go to Decopage to meet Yoda (wait! Obi has an English accent too! Shit! Is Obi evil??), and HAN CONFRONTS LEIA ABOUT THEIR LOVE (!!!!!!!!!).

MUCH MORE ON THAT.

Guys, it’s insane. It happens within the first five minutes of the movie! They’re just walking through the space ship talking about how Luke is always causing problems and Han’s like, “well I gotta go back to my planet because I owe someone money,” and Leia’s like, “Fine. Go,” and Han’s like, “You gonna miss me?” and Leia’s like, “No.” and then Han says, “WHY WON’T YOU JUST ADMIT YOU HAVE FEELINGS FOR ME?!” and then Leia calls him a, “stuck-up, half-witted, scruffy-looking nerf herder.” And then I threw myself off the couch. What even is a nerf?! Ugh. This is an Elizabeth/Darcy tete-a-tete if ever there was one! Lawrence Kasdan, you are my hero. (Unrelated: I looked up that nerf-herder line on Wikipedia and stumbled upon the fact that Leia’s last name is Organa. No idea why).

One of the drones tells the Empire that the Rebels are in fact on Hoth so Darth + Co. make their way to that planet. The rebels somehow get wind of this and start to fly the coop, but it’s a race against the clock and everyone is running around. There is a big Empire v. Rebel battle chase situation in which Leia is a total boss (again) and Luke gets into a crash (AGAIN) losing his co-pilot in the exact same way that Maverick loses Goose in Top Gun. Does everyone just steal from Star Wars? Can I? Ultimately Luke/Leia/Han/R2/Threepio (also learned that’s how you shorten C-3PO which, to be clear, is longer) get separated but luckily Luke is on his own and Han is with Leia on the Falcon so hopefully this just becomes their movie.

Luke (now with R2 as co-pilot) peels off to find Yoga on Decopage and Han/Leia fly off into the sunset but not at hyperspeed, which is apparently a problem. We’ll get back to that. 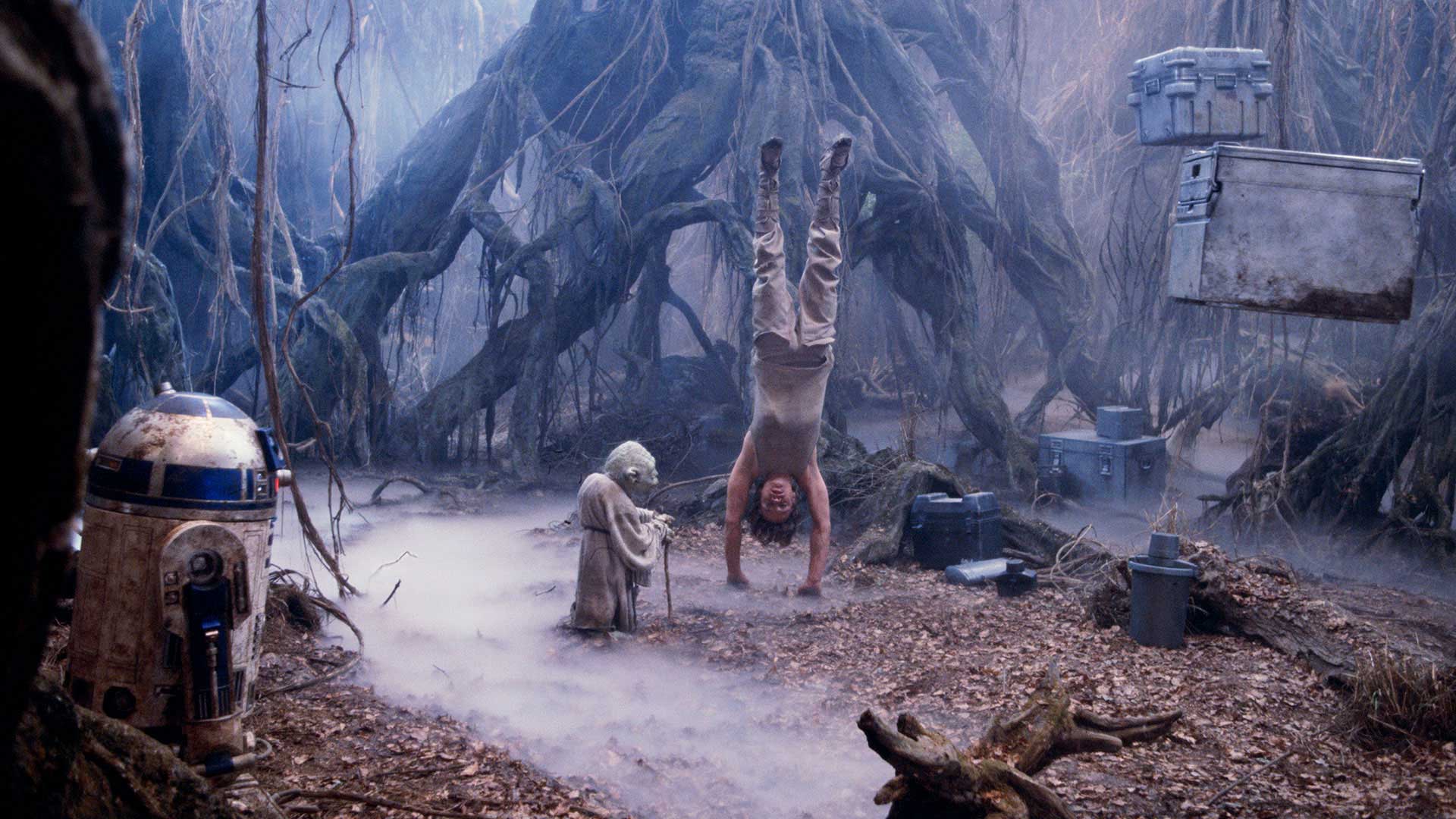 Luke meets Yoda, who could not be cuter, and learns a lot more about the force, which could not be more confusing. They train together on this swamp planet in an even more Mr. Miyagi + Daniel Son way (because Yoga is a 1/2-sized Miyagi), but no matter how many wise things Yoda says backwards, Luke isn’t getting it. Maybe Yoda should just regular say them.

Things take a turn when Luke has a vision of his own head inside Darth’s helmet which is when Yoda tells him that he is at risk of turning to the dark side like Darth. Luke hears him but doesn’t like hear him, you know? Millennials… Anyway Yoda has a lot of really great lines in this part of the movie including this really powerful one:

And this one that’s been co-opted by the not-so-well-endowed men of the world.

Side note: I am now wondering why Ben/Obi didn’t just take Luke to train with Yoda in the first place, but I assume it’s because George Lucas wasn’t smart enough to come up with Yoda so Lawrence Kasdan had to do it.

Okay while Luke is doing hand stands (but not back flips) in Ferngully, Han + Leia are almost dying in an asteroid field in space. This flying-through-astroids scene makes me so nauseous that I want to close my eyes but I can’t because Han + Leia are on screen together. Good thing I don’t because THEY KISS EACH OTHER GUYS!!!! Leia is welding some shit like the princess boss that she is and Han just PLANTS one. This movie is the greatest. 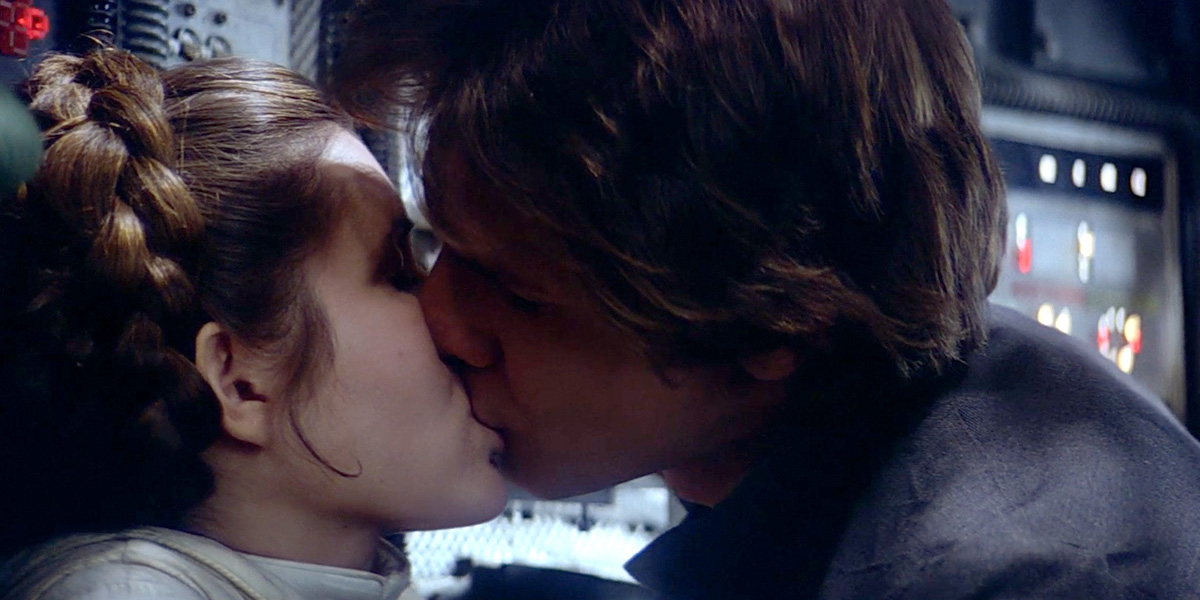 Turns out Han + his new gf Leia are being pursued by the evil vice president himself, Darth. Apparently he also hired a bounty hunter named Boba Fett to track them down. I tell R that Boba Fett sounds familiar but I thought it had something to do with the flute and he tells me I’m thinking about Bella Fleck. Makes sense.

Also somewhere in here we see the back of Darth’s head without his mask on and it is the scariest thing I’ve ever seen.

Han is a genius so the Falcon escapes from Darth + Boba Tea but he needs to get that hyperspeed repaired because he can’t fly his girlfriend around at regular speed so they go to Cloud City Yo, Cloud Cloud City Yo (the “Vegas of the galaxy,” R explains) to get it repaired by a guy named Lando Calrissian who is a strong contender for best name in the galaxy.

Meanwhile Luke has a vision about his friends being in danger and insists upon going to save them. Yoda is very clear about the fact that he is not in any way ready to save his friends because he’s old, not focused and a poor excuse for a Jedi (ouch Yoda), but obviously Luke goes anyway because he is Luke and this is a movie.

I think I left out the part where we meet the actual emperor who looks like Mad Max from The Princess Bride meets Rachel Zoe. I hate his raisin face so much, but R explains that it’s what happens when you embrace the dark side for too long. So the dark side is sun + anorexia. Got it.

Back on Cloud City, Han + Leia actually are in danger because that awesomely named mechanic Lando turns out to be a two-faced jerk who told Darth they were there! It’s all okay because this stress prompts the greatest moment in this movie (yes, I know this is the Luke I am your father movie): when Leia says, “I love you,” and Han says, “I know.” Swoooooooon.

Good thing they got that in because Darth comes to Vegas and sandwiches Han inside a metal door so Boba can take him to Jabba (that’s they guy Han owes money. Odd that he wouldn’t be in the Vegas of the galaxy, I know).

Enter Luke who is conveniently too late to save Han but finally gets his chance to flashlight fight Darth.

It. Is. Epic.   The scenery, the sounds, the force-using, the Darth-breathing, the Scott Hamilton moves. Is there a backflip? I think there is even a backflip!!

And then, at the very end of this epic, epic battle Darth says the words that are the only thing I ever technically knew about Star Wars.

Darth Vader: “Obi-Wan never told you what happened to your father.“

Luke Skywalker: “He told me enough! He told me you killed him!“ 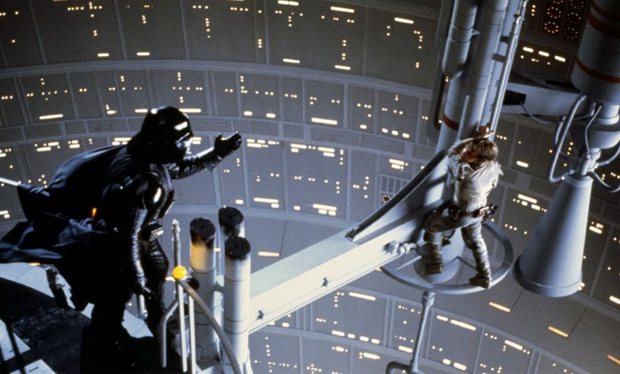 Buuuut also I got into a little tiff with R because I had some issues with the delivery of Darth’s I am your father. It just happened so fast guys. I thought maybe Darth was going to say, “Luke, I have something to tell you.” Or, “Luke, there is something you do not know.” Or, “Luke, you might want to be sitting down for this.” Maybe we might adjust to:

Darth Vader: “Obi-Wan never told you what happened to your father.“

Luke Skywalker: “He told me enough! He told me you killed him!“

I am literally risking the future of my marriage so I’m going to stop now and say that this was an incredibly powerful moment in film history and I am so grateful to have finally experienced it in full, seated alongside my loving husband.

Luke hurls himself into space at this news (valid) and, suddenly, Leia senses his distress (oooooooh) so they turn the Falcon back around to go save Luke (AGAIN).

Once everyone is successfully reunited Lando and Chewie go to save Han (which is the least Lando can do) and Luke and Leia are together wondering what the future holds. Apparently Yoda knows because in a hologram thing Ben/Obi says, “That boy was our only hope,” and Yoda says, “No. There is another.” And we know that’s important because he could have just said, “Another there is,” but he really wanted us to hear this line.

Is there another? Will Han get out of the door? Will we be forced to see the rest of Darth’s raised head? Is Luke ever going to ask anyone about his mother??

Find out on Thursday when these incredibly time-consuming recaps continue with Star Wars: Return Of the Mack. 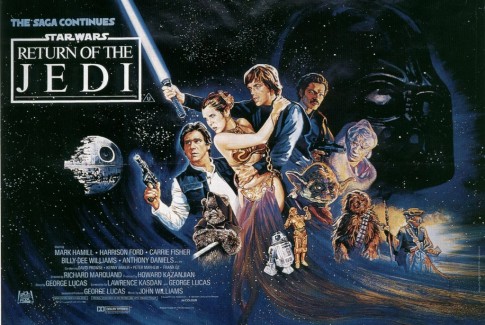 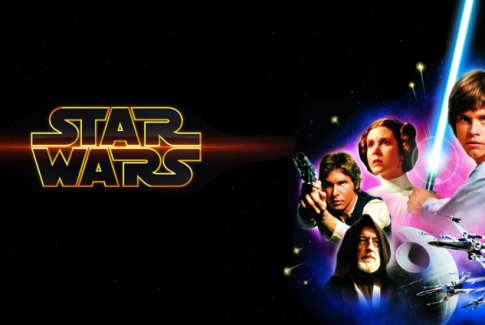