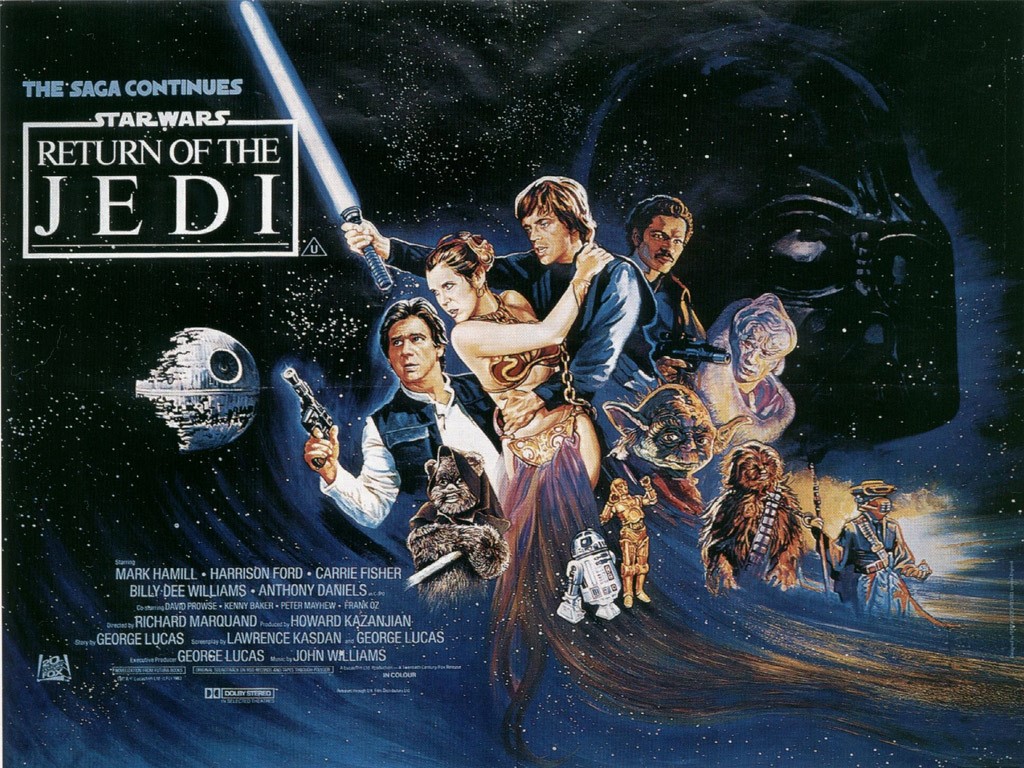 Thank you for joining me on the wild ride that has been my attempt at understanding the Star Wars. I came to terms with the fact that these aren’t movies about Harrison Ford in Star Wars: A New Hope and almost destroyed my marriage over a single line of dialogue in Star Wars: The EmPIRE Strikes Back. Today it’s time to bring this trilogy to a close with my recap of Star Wars: Return of the Jedi or MY favorite Star Wars! Why? On read, my friends.

Star Wars: Return of the Mack

A few things to know right off the bat

I think I like this movie because it is about less things that all seem to make sense together. That’s Star Wars sense not actual sense, but still.

This Movie is About Three Things

The whole thing starts in Jadda the Hut’s…hut, I guess? It’s a scary looking cave place where really terrible creatures hang around drinking and smoking and what-have-you. One character is literally an albino sloth on top of a man with shark baby teeth. I’ve never seen Big Brother but I imagine this is what it’s like.

Luke sends R2 and 3PO (I refuse to type Threepio, oops) to the hut to retrieve Han, which is obviously a death mission so I assume Luke had something else in mind. R2 and 3P end up separated. 3P becomes Jabba’s translator (more on that nonsense later) and R2 disappears (bummer).

Things are very weird here, and then they become even weirder when the whole movie stops so we can have this Jabba + friends music video. No. It is nothing like the Funk Soul Brother moment in She’s All That. Just fast forward.

Meanwhile the Empire is building a new Death Star, but just like an episode of Property Brothers, things are behind schedule. Frankly I’m happy because the half-finished Death Star is one of the coolest looking things I’ve ever seen. Also this means there’s more time for the good guys to destroy it, but mostly it’s just so cool to look at. 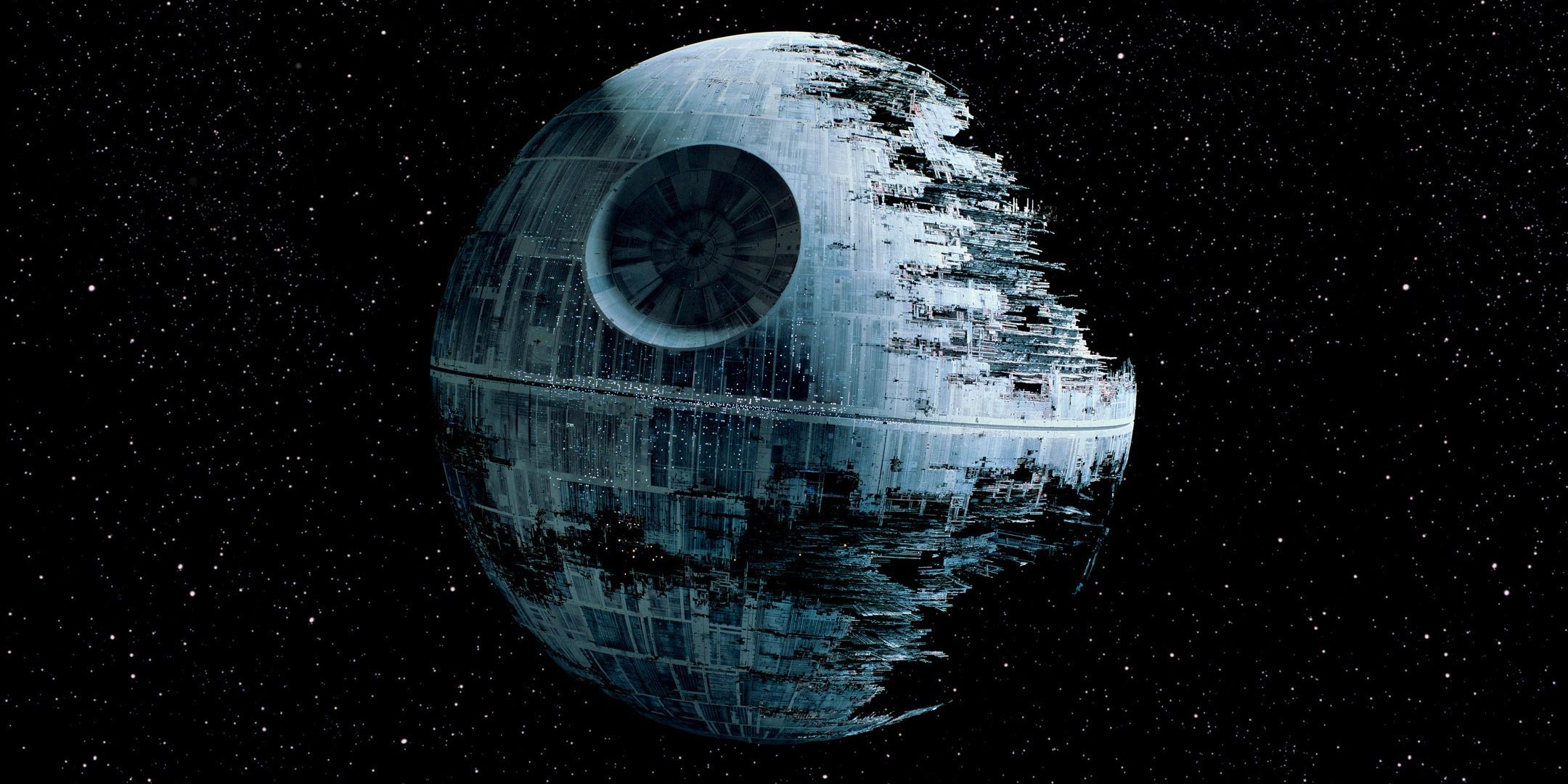 They’re going to be sooo over budget.

Back in the hell hut things really get good. A bounty hunter shows up with Chewie as his slave. Jabba is very excited – or so 3P translates – and everyone goes to bed. Turns out that bounty hunter was PRINCESS LEIA ORGANA (I am now the first person to ever use her last name in print)! She sneaks over to frozen Han in the night and unfreezes him with the press of a button (literally), but when he comes to life he can’t see (so The Princess Bride/Welsley moment didn’t 100% steal from Star Wars, just 50%). Of course Jabba finds them, enslaves them and make Leia wear the world’s most mortifying costume (later popularized by Britney Spears). 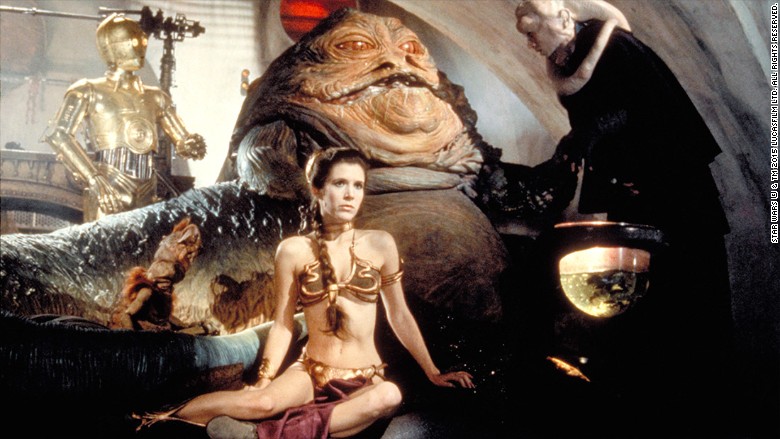 She is so pissed

This is when we find out that Lando and Luke have been in the hut all along. I think Lando was hiding as a bounty hunter and Luke is just a Jedi so now he can go anywhere. Anyway a big fight happens where Luke + Han get throw in this pit that had a name R knew and fight a monster that had another name R knew and I was so confused because no one ever says any of these names! Do they give out some kind of hand out with these movies when you’re a little boy? Anyway the best parts of these scene are:

Okay that was Act One so now it’s time for everyone to try and destroy the Empire just like they did in the last movie.

First Luke has to go check in with Yoga for a little Jedi refresher. Ugh. This part is so sad… Turns out Yoga is 900, and a lot of years that is. With Luke his latest and most important protege by his side, Yoga says the final backwards sentences of his adorable life. I’ll say them frontwards for your convenience: Leia is Luke’s sister! (side note: I knew this. See. I knew a lot about these movies!). I am really excited about this because it means Darth has another chance to perfect his I am your father line (j/k R! It was perfect the first time…).

While Luke is recovering from the sad loss of his tiny teacher, Han + Co. are hatching a plan to destroy the protective shield around the half-done Death Star (side note: so smart of the Empire to employ security while the ship is being constructed. Take note Prop Bros). The on/off switch for that shield is on a planet called Endor so Han + Co. somehow steal an Empire space ship and go there.

This is when it gets really good because on that planet are TEDDY BEAR FIGHTERS! I forgot about these guys/never really knew about them. They are called Ewoks, and they’re like Munchkin Smurfs wearing Monk costumes (much like the not Wookies). I might have named them something more like TEDDY FIGHTERS but whatever.

At first things are rocky between Han + Co and the Ewoks but eventually they become the best of friends and they all hang out together in the Ewoks’ amazing tree-village (which is the exact same set they use for the Lost Boys in Hook because everything is Star Wars). 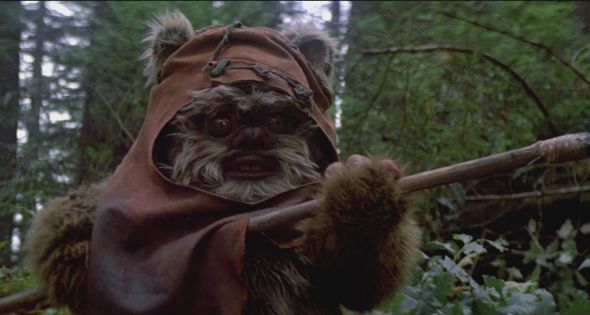 Luke meets up with the others on the Teddy Planet and tells Leia that she is his sister and Darth is his father. He does not, unfortunately, say, “Leia…I am your brother.” I don’t know why. Leia doesn’t seem too phased by this and also does not reference their freaking mother!  R says that all comes out in the three new films but still! No one reading these scripts was like, “Um…lot of father talk here, which is great. Very progressive. But it takes two to tango so…” Poor Mrs. Organa.

Okay now it’s time for Luke to confront Darth once and for all. He doesn’t know that he’ll also have to contend with old raisin face himself, The Emperor. This battle is intense and not just because of the double enemies and double capes and more sophisticated flash lights. The Emperor keeps saying that if Luke is angry then he’s turning over to the dark side, so Luke somehow has to keep fighting without being angry? Zen fighting? Jedi fighting? Seems like that would have been important for Yoda to mention… 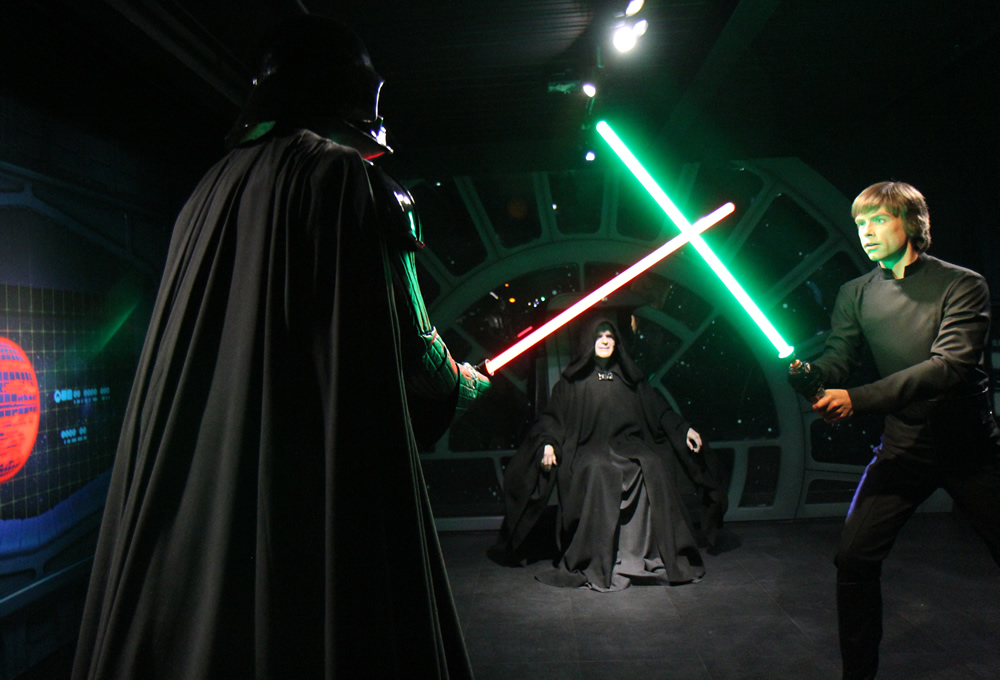 Turns out the answer is fighting with his words not his flashlight (Pen v. sword. Amen Star Wars). He tells Darth something like, “I am your son. Your are my father. Look at me. I’m such a success. Also you have a daughter. Yadda yadda love love light side don’t go wrinkly yadda you’re not even the Emperor over here anyway!” AND IT WORKS.

At the very last moment Darth lets the Emperor kill him instead of killing Luke (in another very Snape move). It is so beautiful, until he takes his helmet off and we have to see his actual face, and it is even more terrifying than anything inside Jabba hell. I won’t post a picture here because a. too gross and b. apparently too important to be revealed outside of the movie structure (but mostly a.). Luke is sad. I am sad. R is the saddest.

Now our team is reunited. Han + Leia are off to plan their wedding. R2 and 3P might be off to do the same. Lando and Chewie are feeling a little alone, but they’re good guys so they’ll find someone. And Luke is at peace knowing that his father died a good guy (very briefly). In the final shot we see three holograms smiling back at Luke: Ben/Obi, Yoda, and a young Darth aka Anakin Skywalker aka Hayden Christensen (“because Lucas changed it after he made the new movies,” R said with a huff.) 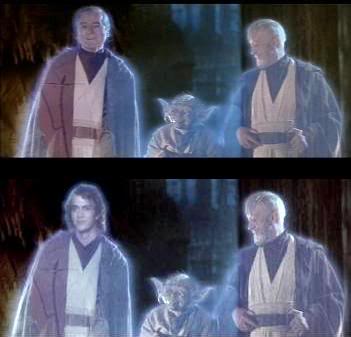 I’ll be seeing Star Wars: The Force Awakens with R and his dad in New York this coming week. Recap to follow, unless Han + Leia split up in which case I’m walking straight out of that movie theater!

May the force be with us all. 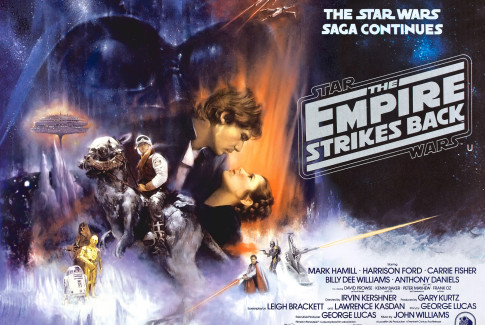