Sexism: Pseudos — they seem like they want to date you…

My Daily Beast piece: Nobody to Somebody?

Apparently you need a first date 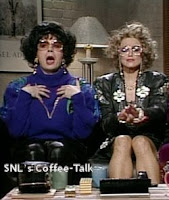 No I didn’t post a Thursday First Date because I received one — count them — one story worth posting and even that came too late for Thursday morning.

This leads me to believe that you’re either not going on first dates or don’t want to tell me about them, and it’s obviously the former.

Because it is, I’ve found, very hard to get into a relationship without going on a first date — I’ve collected the wealth of wisdom from posts past so you can get a first date, make it interesting, and send me all the details.


–>
Take cabs, everywhere…
Get personal business cards
If you have the patience of a saint — or very few friends — do match.com
Stop and chat to the guys selling impoverished children on between 5th and 6th (I mean every day with this…)
Think like an unemployed banker
TIP YOUR DRY CLEANER
Use Craiglist for (clever) evil…
Go only to house parties and never to bars
Or just make someone set you up