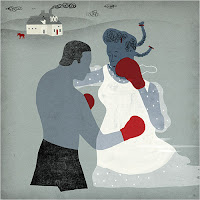 You think you know what it means to be a strong woman — a strong person even — and then you read this essay.

“Sure, you have your marital issues, but on the whole you feel so self-satisfied about how things have worked out that you would never, in your wildest nightmares, think you would hear these words from your husband one fine summer day: ‘I don’t love you anymore. I’m not sure I ever did. I’m moving out. The kids will understand. They’ll want me to be happy.'”
If you don’t read Modern Love — the New York Times’ Sunday Styles essay on love and relationships — start today.  This and all the stories that appear within are incredible accounts of what the human will/brain/spirit is capable of, but so far none have affected me quite as much as this piece.
“Here’s a visual: Child throws a temper tantrum. Tries to hit his mother. But the mother doesn’t hit back, lecture or punish. Instead, she ducks. Then she tries to go about her business as if the tantrum isn’t happening. She doesn’t “reward” the tantrum. She simply doesn’t take the tantrum personally because, after all, it’s not about her.”
It was through this lens that the author decided to view her husband’s decision to be done.  And I say decided because you’ve got to believe some if not most parts of her wanted to say “good luck to you” or “how dare you” or “ouch.“
“‘I don’t love you anymore. I’m not sure I ever did.’

His words came at me like a speeding fist, like a sucker punch, yet somehow in that moment I was able to duck. And once I recovered and composed myself, I managed to say, ‘I don’t buy it.’ Because I didn’t.  He drew back in surprise. Apparently he’d expected me to burst into tears, to rage at him, to threaten him with a custody battle. Or beg him to change his mind.

So he turned mean. ‘I don’t like what you’ve become.’

Gut-wrenching pause. How could he say such a thing? That’s when I really wanted to fight. To rage. To cry. But I didn’t. Instead, a shroud of calm enveloped me, and I repeated those words: ‘I don’t buy it.'”

It’s jarring to read.  It must have been even more jarring to hear.  What it felt like to say – oh my god I hope I never have to know.
The story goes on to paint the picture of a man whose career struggles had turned him unhappy with life in general.  He’d experienced failure in one area and decided change in all areas was what he needed.  For many, many people this may be true.  For the author’s husband — in the author’s opinion — it wasn’t.
And so she said to him, “‘There are times in every relationship when the parties involved need a break. What can we do to give you the distance you need, without hurting the family?”

“Go trekking in Nepal. Build a yurt in the back meadow. Turn the garage studio into a man-cave. Get that drum set you’ve always wanted. Anything but hurting the children and me with a reckless move like the one you’re talking about.”

It gets more wow with ever paragraph you read.
Yes, she thought it might be another woman.  Yes, she considered a hidden drug addiction.  Sure she was absolutely furious and hurt and confused, but those emotions weren’t constructive to her goal of a. letting her husband have the “tantrum” he obviously needed and b. keeping their family protected and intact while the storm passed.
Now this is where it gets incredibly hard to swallow.
“Well, he didn’t move out.

Instead, he spent the summer being unreliable. He stopped coming home at his usual six o’clock. He would stay out late and not call. He blew off our entire Fourth of July — the parade, the barbecue, the fireworks — to go to someone else’s party. When he was at home, he was distant. He wouldn’t look me in the eye. He didn’t even wish me “Happy Birthday.”

But I didn’t play into it. I walked my line. I told the kids: ‘Daddy’s having a hard time as adults often do. But we’re a family, no matter what.’ I was not going to suffer. And neither were they.

MY trusted friends were irate on my behalf. ‘How can you just stand by and accept this behavior? Kick him out! Get a lawyer!’

I walked my line with them, too. This man was hurting, yet his problem wasn’t mine to solve. In fact, I needed to get out of his way so he could solve it.”

And then she gave him 6 months to show some signs of turning around — except she never told him the time limit had been set.  Time and accomplishment inside that time was his problem; knowing he had a limit would only make matters worse, she decided.
“I simply had come to understand that I was not at the root of my husband’s problem. He was. If he could turn his problem into a marital fight, he could make it about us. I needed to get out of the way so that wouldn’t happen.”
The author describes the bad, low, miserable days she had within that 6 month window, and you just want to scream reading them!  You want to say, “you don’t deserve this!” and “this guy’s an asshole” and “don’t you have the self respect to be treated better!!??”
But you know she’ll say, “it’s not about what I deserve right now” and “this guy’s behavior is that of an asshole, but deep down he isn’t” and “I am taking my own approach to showing him that I deserve to be treated better.”
And you think — once again — wow.
“Instead of issuing ultimatums, yelling, crying or begging, I presented him with options. I created a summer of fun for our family and welcomed him to share in it, or not — it was up to him. If he chose not to come along, we would miss him, but we would be just fine, thank you very much. And we were.

I barbecued. Made lemonade. Set the table for four. Loved him from afar.“

I want to be clear.  This “approach” is not for everyone.  Some relationships are truly abusive and should be escaped for safety reasons.  Some relationships prove irreconcilable way faster than a 6 month trial period.  And sometimes simply hearing “I don’t love you anymore; I’m not sure I ever did” is absolutely enough to walk away forever.  In this case — for this woman — for many very person reasons — it wasn’t.
Read the end of the essay; I can’t do the final story justice, but these last thoughts from the author are, to me, the most fascinating:
“When life’s knocked us around. And our childhood myths reveal themselves to be just that. The truth feels like the biggest sucker-punch of them all: it’s not a spouse or land or a job or money that brings us happiness. Those achievements, those relationships, can enhance our happiness, yes, but happiness has to start from within. Relying on any other equation can be lethal.
My husband had become lost in the myth. But he found his way out. We’ve since had the hard conversations. In fact, he encouraged me to write about our ordeal. To help other couples who arrive at this juncture in life. People who feel scared and stuck. Who believe their temporary feelings are permanent. Who see an easy out, and think they can escape.”
I have not been through a 20 year marriage or career failure, and I do not have kids or even a dog watching me go through those things, or things as little as a bad day, so I can’t relate to this story in the traditional sense.  But the idea that we’re sometimes not really who we are but only temporary struggling versions of ourselves reeling from effects (environmental, societal, peer pressure induced) that we can’t even source is a very real feeling.
This man was lucky to have someone who knew him well enough and loved him unselfishly enough to help him work through that.  Is that a case for or against marriage?  For or against unconditional love?
Out of respect and admiration I’ll take the author’s approach.  I’ll say “for”.