Precisely what’s so scary about my scary age

What (would) happen if your crazy-wings got clipped? 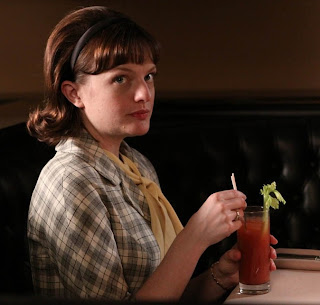 I was watching Sunday’s MAD MEN last night when something struck me. In general that’s either the fact that I can hate and love Don Draper at the same time despite him not being real and my not generally being attracted to men who speak in monotone or how nobody is paying attention to the fact that Sally Draper is on the fast-track to hussy-ville, but last night my hhmm involved the mysterious-yet-lovable Peggy Olson.

SPOILER ALERT. Peggy is dating a sensible boy whose name I can’t remember but think is Mark. Mark really likes Peggy even though she works too much and has a wardrobe entirely consisting of wool. Peggy seems to really like Mark even though we all know something is eventually going to go down between her and Pete (again), and her and Don (eventually). Regardless, Peggy and Mark are currently in a relationship.

Last night Mark paid a surprise visit to Peggy for the purpose of convincing her to have sex with him under the guise of giving her a box of what appeared to be chocolates. Which, reeeaaal quick:

It’s a really lovely idea to give your girlfriend a small token of your love any slash all the time. It can be especially nice to give her a gift before or after you ask her to help you with something. But perfume is not to help-decorate-my-apartment as chocolates are to please-give-me-your-virginity. Not at all. And, especially not after you blatantly point out that you brought the chocolates as a bribe. Come on buddy. This is Peggy Olsen. Every day of her life is a professional sausage fest. You’re going to need to up your game. Thanks.
So – Mark pushes – further than to my liking despite the fact that I’m annoyed with Peggy for this (MAD MEN VIRGIN SPOILER ALERT) I’m-a-virgin rouse she’s putting up. Peggy says, “I think you should go home now,” like the ice-princess Pete Campbell made her. Mark gives her a sloppy this-is-what-you’re-missing kiss, then blatantly says this-is-what-you’re-missing (this guy is total JV squad), and then the scene ends.

Which is precisely where my ah-ha moment comes in.

Hhmm, that was awkward, I thought. I wonder what Peggy is going to do now!?

Until I quickly realized the answer was absolutely nothing. Put on a pot of tea, perhaps? Go back to applying Ponds Cool Cream? Make a cucumber and cream cheese sandwich for tomorrow’s lunch (this is what Pegs eats in my mind)? But in relation to continuing the evening drama with Mark – nothing.

Which (and here, finally, is the point) would be the exact opposite of what the 2010 version of Peggy would do because the 2010 Peggy Olson would have, at her disposal, all the technology to make some crazy.

Today’s Peggy would start by shooting a quick BBM to Mark once she was sure he had gotten into the subway. “Hey, sorry to be so weird. You know it’s just cause I want 2 take it slow, right?…” Then she’d jump on the blackberry to recount the entire story to whatever friend picked up first while powering up her Macbook pro (because she works at an ad agency) to start the same tell-all process with whomever was on gchat.
Once she was satisfied with their assessment that yes Mark is a douche but whatever because all guys are and at least he’s less a douche than (SEASON THREE SPOILER ALERT) Duck, who she never should have gotten involved with in the first place because a. he’s sooo old and b. he’s divorced and c. his name is Duck – so she should totally stay with Mark because he’s a contender and totally looks like a husband. Once Peggy felt properly purged and completely right in all her assessment of the Mark situation she’d likely engage in some quick Facebook action (liking spree, some wild wall postings, ideally an upload of an awesome picture of herself looking super happy and “virginal”) sos to prove to Mark that this episode did not mar her entire evening.
About around the time that was all complete Mark would have emerged from the subway to his Murray Hill neighborhood (approx. 20 minutes from Peg’s East Vill locale) and would respond to Peggy’s BBM with a “Yeah, it’s cool – just makes me feel like you don’t trust me…” Aanndd so would begin the 30 minute BBM battle over why Peggy does trust Mark, why Mark thinks they should have sex, and what this all means for the future of their relationship. All-the-while Peggy would have returned to the gchat sos to deliver a play-by-play of the BBM convo to the girlfriends she can’t tell over the phone because the phone is in use for the BBM. It will be around this time that Peggy considers getting a landline for precisely this kind of scenario, then quickly discounts the thought because where does one even buy a cordless phone these days?
Instead our Peggy went back to work for the eve, shared the brief story with a formal alcoholic colleague the next morning, listened intently to his advice about what I believe was the discomfort of blue balls, aaannnd slept with Mark that night.
Right, so, hhmm….