This is the tumblr I wish I was writing.

How to build a palette garden and test the strength of your new life of co-habitation!

GIRLS Recap: Week One, The Pilot 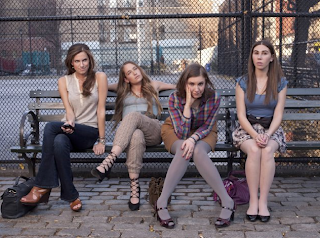 “I think you’re trying to talk yourself into hating this show,” R said after I said, “I think I’m going to hate this show,” for the 20th time.

That may or may not be true.

That said, after the first episode, I intend to watch more. There were good things and bad things, hysterical things and ridiculous things, things I would have left out of my own script on this same subject, and things I would never have been clever enough to include.

Here is my attempt at a recap/review:

Hannah (Lena) – 24-year-old aspiring writing who thinks she may be the voice of her generation. Lives with her best friend in what appears to be Brooklyn. Interns for free at a publishing company. Hooks up with a terrible guy.

Marnie? (Allison Williams, as in Brian’s daughter) – 24?-year-old with some unclear paying job. Living with Hannah in what appears to be Brooklyn. Has a boyfriend who is too nice, so she wants to dump him. Is the “voice of reason.”

Jessa (Jemima Kirke) – Also 24?-year-old college? friend of Hannah and Marnie. Is British. Has lived everywhere. Just got back from Paris and is living with her annoying cousin. Is a “free spirit.”

Hannah’s Parents (their actor names were not on IMDB, strangely) – Over-protective Father, “Over it” Mother.

Hannah’s Parents Cut Her Off – O.P.F and O.I.M take Hannah to what appears to be an expensive dinner where they tell her they’re cutting her off. Apparently they’ve been bank-rolling her entire life for the past two years. Hannah doesn’t understand how they could possibly do this to her. Do they know how tough the economy is? Don’t they know that every single one of her friends gets help from their parents?? Don’t they know that she’s a struggling artist who just needs to live, then finish her memoirs???

The Dad is like, “I know, sweetie, I know.” The Mom is like, “I want a country house, sweetie. Get a job.” Hannah is like, “I’m busy trying to become who I am,” which is a legit deep line if you think about the fact that you always are who you are but need time/money/support to become the adult version of that person. I liked her after that line.

Do 24-year-olds like Hannah live off their parents money while they Intern in Manhattan for free? Yes. Are they totally unaware that this is outrageous? Yes. Do I at all relate to this scene what-so-ever? No, but it was still funny, and Lena writes for herself very well, which seems obvious but isn’t.

Marnie Doesn’t Like Her Boyfriend – Marnie’s boyfriend is “too nice,” so she’s not sexually attracted to him anymore, etc. She says, “he’s so nice to me and that makes me angry,” which makes me angry with and sad for Marnie.

If this was a Sex and the City episode it would happen around Christmas time, Carrie would type out some pun like, “Can you be too naughty, or too nice?” and then the whole episode would revolve around that whole idea. I sort of wanted to watch that episode. While I am personally annoyed by girls who dump guys because they’re too nice, then complain when the next guy treats them like shit, I acknowledge that this is a thing, and that it’s common among young people (ohmygodI’mold).

Hannah Asks her Boss to Pay Her For Working –As discussed, Hannah is an unpaid intern (holler if ya’ been there!), so when her parents cut her off she goes to her boss and asks to be hired as a legitimate employee. This is my favorite scene in the show because it is positioned as a comedic interpretation of what might really go down if a Hannah-type asked this question, but I think it’s completely and totally realistic. Boss is like, “so nice having you here! Best of luck!” Hannah is like, “I’ve worked here for two years, and other interns have been hired as full-time workers.” Boss is like, “In this economy….do you know how many internship requests I get every day?…I know you’ll land on your feet.” Long story short (my words), “lots of other kids parents aren’t cutting them off, so I’ll just get one of those kids to work for me for free because that’s totally legal in this country.”

After this scene I was like, “thank GOD this show is raising such an important cultural issue of our times!!” and then, louder this time, OHMYGODI’MOLD.

Hannah Goes And Hooks Up With Terrible – Walking home from getting “fired” Hannah is like, “you know what would make me feel like I have value in this world? Having terrible sex without a condom with the guy who never texts me back!!” Much of this episode featured very real things that very real 20-something girls do, but this was the most real of them all. I wanted Hannah to be stronger and more sensible, but I acknowledge that a show about a strong, sensible girl who does everything right would probably be boring.

I could have done without the graphic nature of this terrible sex, but if you’re trying to make a strong point really linger in the minds of your audience, a naked butt helps.

Jessa Comes Home From Europe, Drops a Bomb – From what I can gather, Jessa went gallivanting around Europe after college (where, in fairness, she is from), but is now returning to NYC for some indeterminate amount of time. Hannah is excited about this because she worships Jessa’s vagabond spirit (as all rich, 20-something girls who want to be writers do). Marnie is pissed about this because she thinks Jessa is irresponsible and immature (this from a girl who slept in her roommate’s room to avoid sleeping with her boyfriend).

Jessa arrives to the apartment of her annoying cousin who is obsessed with Sex & The City. A.C. delivers the second most annoying dialogue of the show (note: the first is when Marnie explains the progression of modern communication from Facebook chat to phone call) when she explains that Jessa is such a Carrie but with Charlotte hair, or something like that. I guess if you’re the long-awaited “follow-up” to S&TC you have to acknowledge its existence, but a poster on the wall was enough for me.

Jessa then shows up super late at the dinner party Marnie reluctantly threw in her honor. There she convinces Hannah to go beg her parents for more money after Hannah drank too much opium tea (which is the most hysterically Brooklyn thing about this episode). Marnie is all, “don’t bring her into your web of irresponsibility!” and Jessa is all, “I’m PREGNANT!”

The fact that she’s pregnant is fine/interesting/realistic/whatever. The fact that she yells it out completely unprovoked is one of my biggest TV/movie pet peeves. Either get us to that point with a conversation that somewhat naturally leads to that confession, or explain the confession once it happens! Yes, this is me on the screenwriting high horse I don’t deserve to be writing.

Hannah Asks Her Parents for More Money – …in the middle of the night, while high on opium tea, by demanding that they read her “book” and then telling them she thinks she may be the voice of her generation. Oh, also, she asks for $1,100 for the next two years. A. How far into Brooklyn is she living that $1,100 a month will suffice for rent, health insurance and life? And B. TWO MORE YEARS?! I had been pretty well-behaved up to this point, so I felt I earned one massive eye roll. I asked R if he thought Lena Dunham wrote that line to be ironic because so many people have been calling her the voice of our generation. R said, “I think she wants to think she’s saying it ironically.”

And with that, R summed up my feelings about the whole show. Exactly how ironic is it supposed to be? Right now it feels somewhere between a caricature of 20-something Manhattan and a show about four girls you once met at a party in Brooklyn and thought, I am nothing like these people, right??

I will say that at first I appreciated the drab lighting, sad music and realistic wardrobe, but after 30 minutes all I wanted was a bright, blue sky and some 5″ Jimmy Choo’s. Does that make me shallow? Does it make me old? Or does it make me a bitter, 20-something writer who doesn’t have her own TV show?…

Please add on to the “review” with
in comments with your own assessments!
I’ll be back next week with another recap.