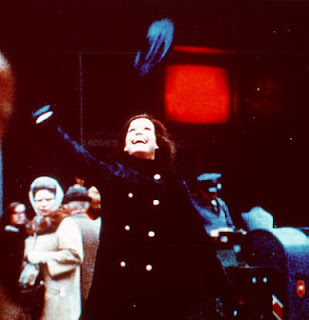 My writing career is taking some exciting baby steps forward, and in the world of a writer that exciting baby step comes in the form of “general meetings.”  Here in L.A. we just call them “generals” because why say a whole extra word, especially if that extra word lets outsiders into the secret of what we mean by “generals.”

General meetings are meetings with no real agenda. You could call them “vagues” or “exploratories” but those two words offer almost too much meaning. I think of that as informational interviews and/or first dates.

The goal of a general is to introduce the “talent” (writer, director, etc.) to the “community.” The “community” is the various producers, network heads, development executives, etc. who might eventually offer the talent “work.” “Work” refers to lots of different things that we’ll have to get into some other time (when I’ve figure out what they are).

So here are the steps to securing and attending a general with a member of the community who may some day offer you work:

-Those people with influence send this piece of material to those people with the power to make things on your behalf. They say, “I’m so excited to introduce you to Jane Doe. She has this great script that you have to read, and I’m telling you, you are just going to love her. We’d love to set up a general for you to get to know her and hear some of the amazing ideas she is working on.”Also, “the power to make things” is super vague. Think of it as, “buying power,” or access to buying power.

-That person may or may not actually read the script, but if they trust the person calling on your behalf, they will “take the meeting.” Not “have it” but “take it.” That’s a very important distinction.

-This meeting with last from 15 minutes to an hour and a half. It will very rarely start on time, but that’s not to be taken personally. Nothing in L.A. starts on time as a point of principal.

-For the first 75% of the meeting you will talk about 125 things that do not in any direct way relate to your script, your career, or the purpose of this meeting. They will include but not be limited to: where you live in L.A., how long you lived in New York before moving to L.A., where you are from originally, whether or not you are Jewish, and so on and so forth. This part is the part that’s like a first date. That are trying to seem extremely impressive but still “real” and “relateable.”

-The next 15% of the meeting will be spent talking about you/your work/your future. This is where the person sitting on the comfy chair says, “so tell me about yourself? what are you working on? what’s next for you?” Here you need to be prepared to both summarize your entire writing life up to an including this moment, then transition seamlessly into “light pitches” of the projects you may or may not actually be working on.  It’s also good if you’ve done your research so you’re pitching things that this person actually buys.

-And finally, the person on the comfy chair tells you about the network/production company “mandate.” That’s the kind of things they’re looking to buy. Of course, don’t be surprised if they say, “that doesn’t mean we won’t read ________,” or, “of course there are exceptions to that, but…..” You can/should take notes during this part of the meeting.

See how nothing really happened and yet everything happened? Here are a few F.A.Q (by my mother) to round out this priceless resource:

–How many of these do you go on? Dozens. Many dozens if you are lucky. I don’t know the max number of possible generals that exist in the entertainment industry, but I’ve got to guess that between TV and film it’s around 150?

-What do you wear? Jeans and a cute top. The jeans should be like “cute dinner jeans” versus “watching Homeland” jeans. The top should follow suit. You can wear a blazer if and only if the top is super casual or it is cold outside.

-So these people really don’t have any jobs for you? Yes and no. Here are the possible outcomes of a general that could lead to work/money.

1. They become so obsessed with you and you work that you are offered a blind script deal (money to just go write any script). Likelihood: 1%

2. They love something you pitched in the room so much that they buy it right then and there giving you a specific script deal (money to go write that script). Likelihood: 3%

3. They really like something you pitched in the room and ask you to come back and pitch it formally (come back another day with a fleshed-out idea). Likelihood: 25%

4. They really like you and, when it is time to hire a writer to write on one of their existing shows, they think of you and call you back in to interview for that specific show. Likelihood: 35%, but there’s a lot of follow-up involved.

5. They really like you, and when it’s time to hear new pitches, welcome and encourage you to come pitch. Likelihood: 75%

See how only one of the percentages is over 75% See why I waited 8 years to quit my job for this?

More on that Thursday…