Reaction to the lateset New Yorker piece about 20-somethings 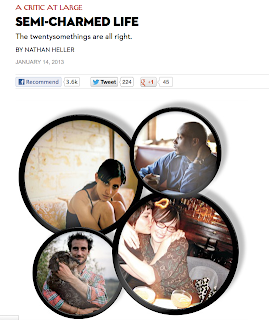 It’s time once again for a long, reference-filled article about the state of the modern 20-something. This time the writer waxing poetic on an age bracket I’m pretty sure he’s grown beyond is Nathan Heller with his piece Semi-Charmed Life: the twentysomethings are all right.

As you know, I approach these attempts to understand “my generation” with a groan. Doesn’t the New Yorker have something better to do than tell us we’re weirder than any generation prior? What’s the never-ending fascination? Please, just leave us alone! In fact, here are the four nearly identical posts I’ve written over the years to that exact same effect:

But now I’m 29.damn-near-five. I’ve essentially lived through my twenties. I am far more concerned with an article about surviving your 30-something milestones. So this time I found myself reacting to the major points of the article through a different lens than my 25 or even 27-year-old selves. And here’s the craziest part of all – I was thrilled about that perspective. I’ve never been calmer reading one of these generally annoying articles. This felt very strange.

Here are a few chunks of this new piece, which you should read in its entirety, if you feel like it (27-year-old me would have demanded you read it immediately). Below each chunk is how I would have reacted at 25/26/27, and how I reacted today.

1. “…the twenties look different depending on how far you are from them. That difference in perspective—you want what you think older people have, and vice versa”

2. “their lives are not what they had hoped. Their grinding work in college has failed to produce a decent job. Their confidence is at its nadir. They are having too much hapless sex, or not enough, or maybe the wrong kind. And what if they never get married? In an earlier guide, “20 Something Manifesto: Quarter-Lifers Speak Out About Who They Are, What They Want, and How to Get It,” Christine Hassler refers to this feeling as the Expectation Hangover™.”

3. “We don’t become what we don’t hear and see and do every day. In neuroscience, this is known as ‘survival of the busiest.’ ” In other words, it’s good to be mulling knotty problems at your desk, bad to be doing lots of nothing on the beach. Jay’s treatment doesn’t quell the general anxieties of twentysomethings; it channels them.”

4. “And average college debt, adjusted for inflation, has tripled since the late nineteen-eighties. (It’s still growing.) In the face of these and other shifts, the voices of previous experience seem questionable. It is not clear that the grownups know what’s really going on”Samantha Henig points out that Ally McBeal, the late-nineties TV paragon of desperate singledom, was supposed to be twenty-seven when the show began—a freak-out timeline that already seems quaint for an urban professional. (The current version of that character, Liz Lemon of “30 Rock,” is a decade older.) There’s no shame now in being a twentysomething without imminent family plans, and there may even be extra power. A study has found that women’s salaries at this stage of life increase by a fixed percentage each year they don’t have children. One researcher reports that, on average, putting off having kids for ten years doubles a young woman’s lifetime earnings.”

5. “As Henig mère puts it, “Choice overload . . . makes people worry about later regretting the choice they make (If there are twelve things I could do tonight, any one of them might end up being more fun than the one I choose); sets them up for higher expectations (If I choose this party out of those twelve things, it had damn well better be fun); makes them think about the road not taken (Every party not attended could contain someone I wish I’d met); and leads to self-blame if the outcome is bad.”

There’s my long-winded, two-brained round up. What’s your perspective? And at what age are you registering the thoughts?

Also – shout out to Robin Marantz Henig and Samantha Henig (included in this article) whose new book Twentysomething: Why Do Young Adults Seem Stuck? is now available. I helped out in their research process and am psyched to read the results. Congrats ladies!