I Now Talk To My Husband Through My Dog

10 Things To Expect The First Week With a Puppy 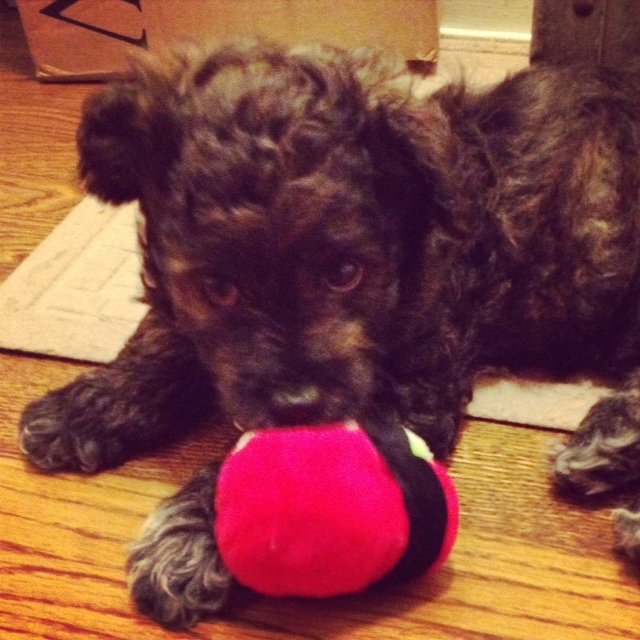 There are countless books on dog training that come in handy the week you bring a puppy into your life. R and I have used Cesar Millan’s How To Raise the Perfect Dog (though How To Raise a Pretty Good Dog and Stay Sane would be even more appreciated), but they all say pretty much the same stuff. And yet no book offers a list like the one I am now experienced enough to write…because I’m too exhausted to write an actual blog post.

10 THINGS TO EXPECT YOUR FIRST WEEK WITH A PUPPY
1. He might throw up. Puppies throw up for lots of reasons, but being so nervous they cannot handle life makes the list. Poor Louie was a barfer twice on the drive home from his pick-up and once on his first walk out into the world. He has yet to toss his tiny dog food pieces again, but we now know the signs. He whimpers a lot, his nose darts to the ground a ton, and he yawns over and over and over again. You can feel a dog start to heave from his little belly, so it can help to hold the pup there so you can tell that he’s about to blow.
2. He will wail. Louie screamed, yelped and did this pretty funny but also devastating howling thing every single time we were out of site for the first two days that we had him home. He was without his mother and siblings for the very first time and his survival instincts (save me from these strangers!!!) were in full effect. It was really, really hard. We spent a lot of time just sitting with him and giving him love and didn’t leave him in his pen alone much until he was more stable. That said we also didn’t hold him in our laps for 48 hours. According to Cesar love and attention is important but coddling is a mistake.
3. You will step in a pool of pee. If only dog pee were black or red. Louie mostly went on his pee-pee pad because his foster moms are geniuses, but when he missed it ended up on our floors and the bottom of our feet!
4. You will worry. If you are anything like me… The first two days I was worried that Louie was going to destroy his lungs for life. The third day he calmed down so much that I was sure he was deathly ill. He ate leaves, I worried. He threw up the leaves, I worried more. Turns out puppies let you know when something is wrong (their poops are way off, they won’t eat, and they’re very, very irritable), and otherwise it’s all just part of the process.
5. You will be on edge with your bf/gf/fiance/roommate/husband/family. It’s a major life shift and there will be a moment or ten when one person feels one way and the other disagrees. Try to let it go. One misstep in the training process does not a Marley and Me devil dog make, but a big fight during an already stressful time in your life can have a more lasting impact.
6. You may gag at the smell of certain dog food. Soaking Louie’s puppy food in water and then heating it up in the microwave almost did me in, but now I can barely smell it! And that’s not just because I bought seven expensive candles the week he arrived and have been burning them non stop.
7. You will want to cave on certain decisions. It would have been so much easier to have Louie sleep in our bed those first nights but we stuck with the crate training and now he sleeps through the night without any issues. I do not blame anyone who makes the opposite decision, but if you know you want one thing, stick with the plan.
8. He might not like any treats or bones or toys. Puppies are all out of whack when they change environments for the first time, as Kevin from Animal Crackers on Beverly explained. Don’t buy a thousand different treats thinking it’s the scent or flavor that’s the issue – same goes for bones and toys. Once they’re more comfortable, they’ll take to all that good puppy stuff.
9. He may bite you. It won’t be an attacking bite, even if he growls a little and doesn’t want to let go at first. Nipping and pawing is how dogs play with each other, I’ve now read a million times. You’re his “pack” and he’s behaving as he would in the wild. It’s hard to follow the same course every single time (saying OUCH in your best puppy voice and turning your back for a second is one strategy), but it does work with some practice.  Bottom line: he’s not mad at you.
10. You will be overcome with the desire to eat his perfect, smelly little head. I have to control myself when I take Louie out of his crate in the morning or else I’ll squeeze and hug him to death, but he usually tries to climb down my shirt because he’s so excited to see me, so we’re even.
After our first week home with Louie I asked R (through tears…) why there wasn’t an “It Gets Better” video series for people in the throws of raising a baby dog. Now I know it’s because it gets better so quickly that you forget you ever needed a video. Also there’s no time to make one because you’re taking a dog out to pee every hour on the hour.
Good luck if you’re in it and reach out if you need help!
I know next to nothing, but that’s more than I knew a week and a half ago!