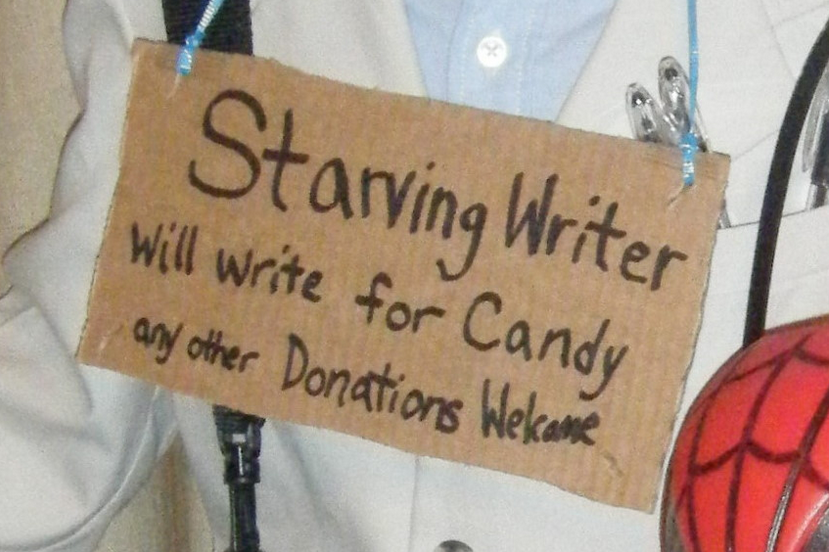 My friend Liz recently sent me an article written by the phenomenal essayist and author Meghan Daum. It’s called My Misspent Youth (Daum has a book by the same name), and it’s written just before she leaves New York for Lincoln, Nebraska – 70,000+ in debt despite successes most writers spend their lives envying. It’s about the fact that life as a writer is a financial struggle no longer conducive to life in Manhattan. I read it twice before I realized that it was written in 1999. That’s before the magazines started folding, the books all went to Kindle and The Huffington Post decided to just not pay writers. No one would publish Meghan’s article today; it’s too obvious.

The article made me sad and mad. I too had debt in my early years, and might still have it now if not for my marriage. Much of the work I do for the most notable publication on my resume is still done for free – I’m sorry exposure. I spend afternoons sending third e-mail reminders to major companies that have owed me freelance money for months.

But I get to do what I love – is the statement that usually comes next. Writing was and is my dream. I have no business complaining. I’m lucky to have achieved all I have. It’s not about money.

Except that sometimes it is about money because life costs money.

And – more importantly – the fact that it isn’t about the money is probably one of the reasons we writers don’t make any in the early phases of our careers.

Writing makes the short list of sucker careers. Musician, artist, actor, dancer and even teacher are right up there too. But sucker is a back-handed compliment of sorts. We’re suckers because we can’t not pursue this passion. We will gladly be taken advantage of at every turn because this is our destiny; we have no plan B; we feel lucky enough to wake up every day and write.

All of that is true. I get down about how much I’ve achieved and how little money I have to show for it from time to time, but I’m no less grateful to be doing what I do.

But GOD it would be nice if the people who need our writing to have a business would give a little more care to us writers.

So instead of going on and on about how hard it is to make a living pursuing this passion/job I thought I would make some suggestions as to how the world might make it a little bit easier to do so. Obviously when reading these you need to pretend that we don’t live in a capitalistic, bottom-line driven, greed-obsessed country. Good luck!

Why not start with the easiest option. I cannot quote the cash flow of every major online or print publication but I can guarantee you that most if not all could pay their writers more money. Instead of $100 for an article, $200. Instead of zero, $100. Here is a list called Who Pays Writers? with some great information about where you can make something close to a living wage.

As a baby writer trying to work in Hollywood you do countless development assignments for no pay. This could be anything from creating a full pitch for a one-hour TV show to writing an entire feature film on spec (read: for free). What if every company just paid a measly $1,000 to engage with you on any project? They want any pages on any portion of any idea, $1,000. That’s half their lunch budget for the week.

Wealthy writers could set up residencies or incubators for young writers

It’s like what Erlich does on Silicon Valley! It is my dream to be wealthy enough to buy an apartment, fill it with baby writers and pay them a little something every month to keep on keeping on. If there are people out there doing this already I would like to know and hug them. Note: some entertainment companies actually have programs like this where writers are paid to incubate and develop. The Disney Storytellers Program is a good example. Good on them!

I’m of the opinion that all internships should be paid but I can only advocate on behalf of so many people in one blog post. Many of the top writing internships take place in Manhattan (for publishing) and Los Angeles (for television and film). You cannot live in either of those cities on zero money. That means that the only people who can accept those internships are people whose parents can pay for their lives. That does not a diverse talent pool make…

There technically already is union for freelance writers – the National Writers Union (note: different from the Writers Guild of America which just covers scripted content for film, television and web), but they have minimal power and publications aren’t required to hire union writers for their projects. You can’t technically hire a TV writer for less than X pay with Y benefits. Imagine if that was the same for freelance writers of all kinds? Yes, lots of other business issues come into play here, but I don’t care. If Steve Jobs can make the iPod function on a single wheel than I can have a freelance writers union.

I know I’m not saying anything that hasn’t been said before, but sometimes it just feels good to remind myself that I’m not invaluable, the system just doesn’t value me.

Then again, Detroit is giving writers houses for FREE. Maybe it’s not the entire system that’s the problem, just the cities we writers insist we have to live in to matter… I think that was the point of Meghan Daum’s piece after all.