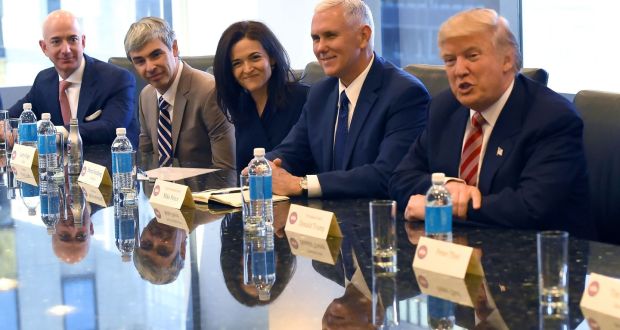 Hi. I’m Jessie Rosen – a huge fan of your work and your person. I was moved and motivated by Lean In. I recommend it often – to women and men – and I refer to it when I’m trying to remember how to harness my power given the challenging climate for women in America. You have become a powerful role model for women, and that is so valuable right now.

But enough pleasantries because you taught me to be direct.

Why did you go to that Trump tech meeting?

I know the technical answer is something like: to open lines of communication around the tech industry with the president elect. I get it, politically. I also get it from a business perspective. This guy is in a huge position of power. One tweet and your company could be royally screwed.

I’ve been bullied. I know all the very strategic reasons you go to the bully’s birthday party. My question is:

Why did you personally meet with Trump this week?

NBC fired Billy Bush for his part in the conversation with Trump on that bus years ago. You went to a meeting with the man who actually supported the sexual assault and smiled for the cameras. You who wrote Lean In. Why?

Do you know that days before your meeting with Trump he said this at a rally?

It’s funny because after I saw that video I went to your Facebook page; I thought of you. I wondered what wise things you’d have to say about how we should feel as women right now. I thought you might have action items or, at the very least, strong words. I thought they might be veiled, strategic. Maybe something along the lines of: this election has taught us that the dialogue around women needs serious work. That a major political candidate can use the language he has about women and still ascend to the highest position of power in this nation means we need to do more. I promise to be part of that education process. I promise to keep leaning in.

But Sheryl, you said nothing. You continue to say nothing. I mean, you said all this: 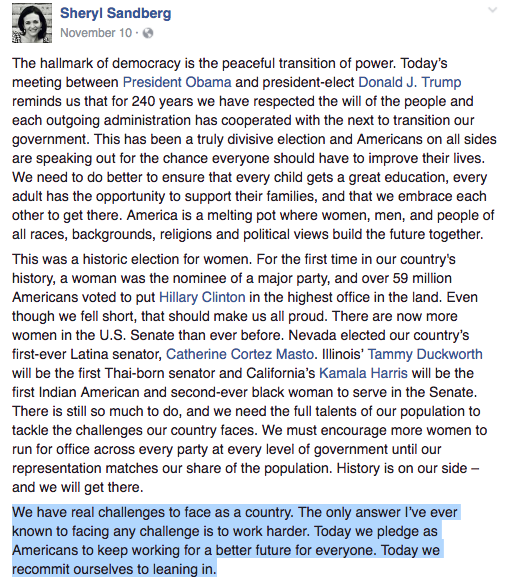 – specifically that section I highlighted, but it’s nothing. It doesn’t acknowledge that Trump’s words and alleged actions (and actions confirmed by him) are wrong. It doesn’t say who needs to work harder or what that hard work is going to look like. It doesn’t even acknowledge the problems. That’s not leaning in, to me.

Am I naive to think that you could and should be taking a stand right now? I’m not a business person. Please help me understand. Would you get fired if you said something more direct? Would Facebook stock drop? Are there bigger things at play that I just can’t understand? These are genuine questions.

Let’s say you refused to go to the Trump tech meeting? What if you said something along the lines of:

I look forward to an open dialogue with President Elect Trump about the state of the tech industry, but first I’ve asked to sit with him privately for a conversation about the dialogue around women in this country. Because that is how I am recommitting myself to leaning in.

Would Mark Zuckerberg have fired you if you did that? Would the board of Facebook have found a sneaky way to get you out? Again, I’m asking genuinely. I’m trying to understand your motivations right now. I’m trying to make sense of who I think you are as a woman and leader versus the choices you are making.

And to be fair, you are not alone. There were other women at that meeting. There are other women letting me down right now. I just feel connected to you, and therefore most disappointed.

You can, Sheryl. You have fame, money and power. If Facebook fired you for taking a stand on behalf of women, you could launch your own company with that as its sole purpose. Wait, you already have one!

So, why aren’t you fighting for us right now?

Maybe we need to back it up. How do you feel right now?

Are you angry? Are you sad? Do you feel powerless and resigned? Did someone tell you to sit down and shut up?

Maybe you’re too busy running a business to be able to handle these more political things. Is your priority your job over the women’s movement? That’s fine. You’re not required to be a Gloria Steinem just because you’re a woman. Feminism is about making your own choices. Is your choice self-preservation and business success? Are you just trying to befriend the bully so none of your friends or colleagues or employees get hurt?

If so, that’s your prerogative. I disagree, personally. But it’s your life. It’s just hard for me because I feel like your Lean In organization is sending a very mixed message right now.

Okay. Maybe you’ve got something big happening behind the scenes? Are there powerful covert opps at place that are going to wow me if I’m just patient and believe? Is Oprah involved? I’ve been wondering where the hell she is, too. If so, can you give me a little secret signal next time you’re on TV? Touch your pantsuit lapel or something?

Because I’ve got to be honest, Sheryl. I want to lean out right now.

I want to run away. I want to say, fuck it, there’s no hope. The bad guys win. Literally. And you, you personally, are part of the reason I feel that way.

If you can’t do anything why should I believe that I can do anything?

We have been polite and political and patient for a very long time. We women. You know that. You wrote a whole book about it. I believe we need to stop, now. And I believe you can help show us the way. So, why aren’t you?

What am I missing? What am I not understanding? And how can I help?