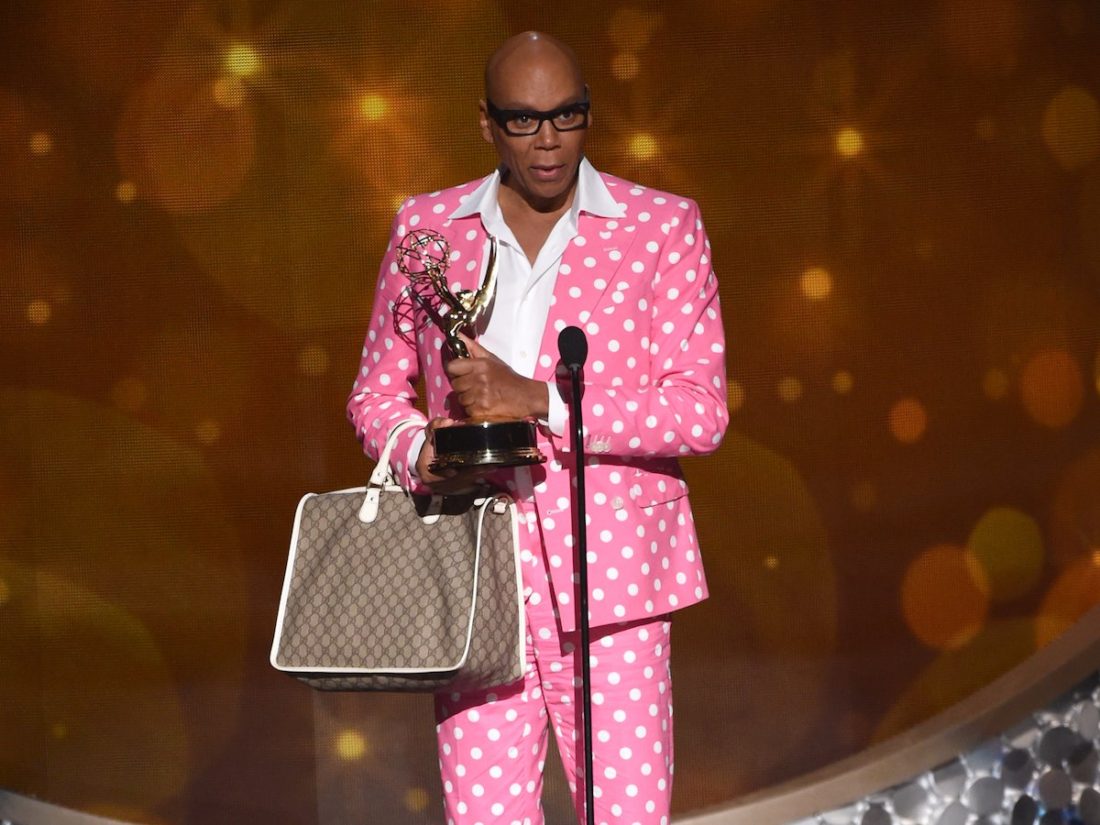 I’ve been really haunted by something that I heard RuPaul say during an NPR news interview a little over a year ago.

It was right after Ru’s Emmy win for best host of RuPaul’s Drag Race – so that’s September of 2016. It was a historic moment and long-time coming for the drag icon. He has hosted the epic Drag Race on Logo for eight seasons but has been in the spotlight for what feels like eight decades.

Ru was moved by the win. So moved he made up a new word on the spot – conDRAGulations – and then added to that brilliance with this quote:

“I dedicate this nomination to outsiders everywhere. Brave souls who, against all odds, stick to their dreams and make the world a more colorful place. On behalf of those people — my tribe — I am so grateful.”

I watched all of that, tears in my eyes. I love Ru. I love Drag Race. I love brave souls who stick to their dreams. I didn’t love the pink polka dot suit choice, but that’s neither here nor there.

So given all that, I was surprised to hear Ru’s response to this NPR interviewer’s question about progress. I wish I could remember exactly what he asked, but the gist of it was do you feel a sense of relief and pride now that we’ve reached this point of representation for the LTBGQ community?

I’m not making it sound sensitive enough. It was a really simple and thoughtful question. Maybe the wording was more like aren’t you so proud of and excited by all the progress of late – marriage equality, etc.?

Doesn’t matter. Ru’s response is the whole point, and it’s a total 180.

Paraphrasing again, but Ru basically said No. I try not to get too comfortable. We can always go backwards.

I was surprised. That sounded like so little hope for such a positive man.

Then Ru explained his answer. He said that the most relieved and excited he ever felt about progress around gay rights was in the ’70s when the movement was really making headway. Remember Harvey Milk’s time was the mid to late ’70s. He died in 1978. I’m sorry, he was murdered in 1978 by Dan White who was only convicted of voluntary manslaughter because of a supposed onset of depression proven by a change in his diet to sugary foods, among them Twinkies. “The Twinkie Defense.” Ru was 18-years-old.

Before Harvey died I thought, this is it, we’re on our way. Then he was killed – boom – and then AIDS arrived – lights out.

I’m too young to really remember the way AIDS impacted the gay community, but I’ve heard enough stories from friends and family members who were there to bear witness. My Aunt Geanna and Uncle Erik who worked among the art galleries of Chelsea at the time said every other man you passed on the streets looked like he was dying. Imagine that. Imagine if, instead of every other person on the street being on their cell phone, they were dying.

AIDS all but destroyed all that progress of the ’70s. And, due in large part to inaction on the part of the government and medical worlds, it erased a giant part of the activist communities living in San Francisco and New York specifically.

From Harvey to AIDS in a less than five years.

At the time of this NPR interview with Ru, Donald Trump as President was still mostly a joke. So much so that Ru didn’t even bring him up in the interview. He didn’t bring up the presidential race at all. It wasn’t the reason for his reservation about progress. At that point the Republicans were a mess and there was a lot of confidence in Hillary. So Ru wasn’t making a prediction based on the cards on the table. He was making a prediction based on the history he’d lived.

I think what haunts me most about Ru’s line of thinking is that I don’t know how it makes me feel. If I took a cue from Ru then I would feel…detached maybe? Or maybe the better phrase is cautiously realistic. He lives his life happy for what he has in the moment because he’s always prepared to lose it. That’s unsettling, but probably smart. Isn’t it that same line of thinking that makes people in the Netherlands the happiest in the world? Low expectations?

I’m not sure I love that lens.

I guess I could go with a hopeful take on Ru’s truth. The pendulum swings back and forth, but every time it swings back toward progress we get more. So this sad, hard right turn we’ve taken with the election of Trump means a massive sweep of justice and equality next?

What is it about humans – or maybe Americans – that makes us so prone to retreat? The moment something is outside our comfort zone we run back to home base. We let fear win.

I’m saying “we” because I don’t think this just applies to the conservative swing of the Republican party. People fear change, personally. I know I do. Right now I’m afraid to buy a house because of the way it’s going to change my life. No, that’s not the same as being afraid of trans people in bathrooms, but it’s not entirely different either. Because bravery seems like one of those trickle up thing – like hope. If we experience it in small ways then we can imagine it huge.

America is supposed to be the land of the free and the home of the brave. That’s the big finish in our big finish song. I’ve never once thought about the connection between those two thoughts, but now that I think of it, I think it’s wrong.

So, how do you inspire that in a nation and its leaders? With a pendulum shift in the opposite direction, again? I don’t know. Does anyone know how to reach RuPaul?