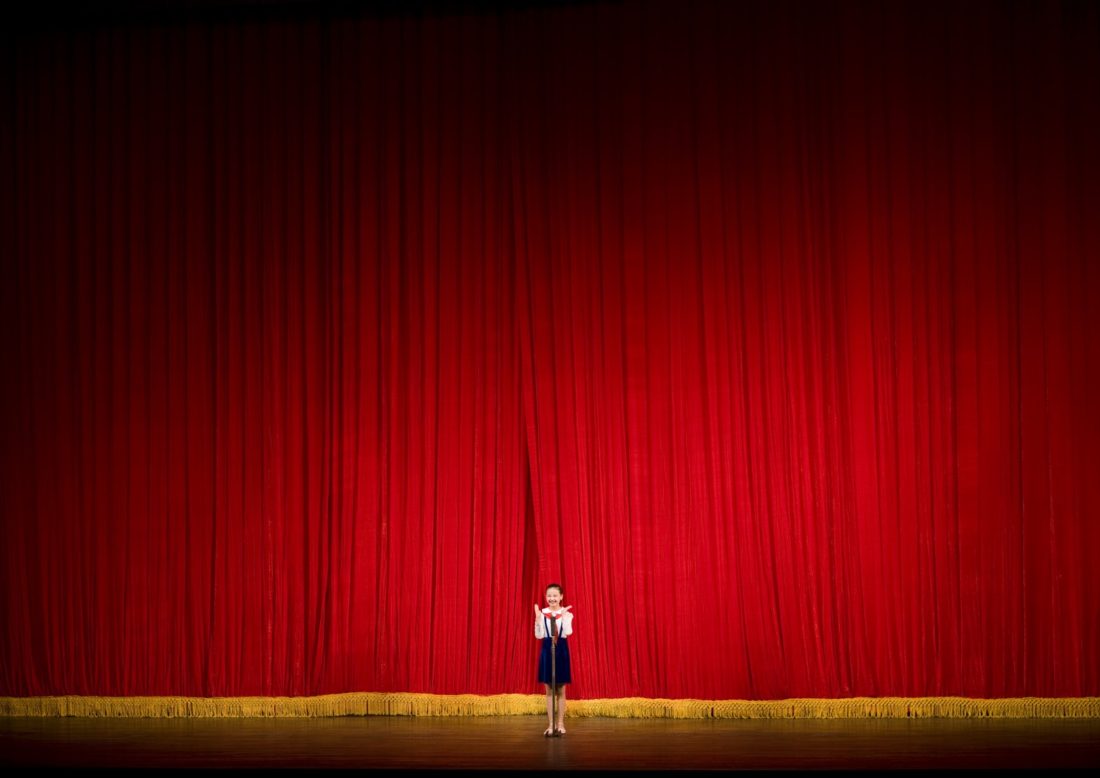 On Sunday night I hosted a No Boys Allowed edition of my storytelling series Sunday Night Sex Talks.

I started Sex Talks almost six years ago. I had the idea because of a gathering I fell backward into during college (a gathering of conversation, not sex). I was looking for some way to get involved with the comedy community when I moved to LA, and the idea of turning that experience into a live show popped into my brain. I found our first venue by cold calling a million venues. I found our first performers by cold e-mailing a bunch of talent managers, and begging a bunch of friends. And then I kept producing the show – month after month, year after year.

But that’s not how it sounds when I talk about the show from the very stage where I host. It sounds like an operation I launched with a group of friends and maintain with a group of collaborators.

We have been doing this show for almost six years, I say. We started this show to accomplish x, y and z, I say. It’s really important to us that this show is a safe space. I’m like that weird nursery rhyme about the little pigs that people sing to baby toes – and she went we we we all the night long… (That is a thing in more than just my family, right?).

And that’s not the only place that I we-d instead of I-d, that very night. Two minutes after the show I was chatting with a friend about a script I sold. I said when we wrote it and when we sold it and now we’re writing more episodes. I caught myself and corrected. Oh, she said, I thought you had a writing partner.

Of course she did. That’s exactly what I made it sounds like.

Look. All creative work is collaborative work at some point in the process. Sex Talks wouldn’t happen without the participation of performers or support of an audience. I’ve also worked with website designers and publicists over the years. Same goes for a script, even one you write entirely on your own. My managers gave me notes and then took it out for sale. A development executive bought it and is helping take it to the next level. There is a we to absolutely everything I do.

But that’s not why I we when I describe these projects. I’m not highlighting the collaborative nature of the entire entertainment industry; I’m diminishing my own role in my own stuff. I’m making sure that you – whoever is listening – don’t think that I think I’m some kind of big deal. I’m about teamwork. I’m about shared success. I’m about us.

So then why does it feel so gross to type those facts…and leave them there?

I remember reading in one of the million books about women-in-the-workplace that many women are uncomfortable with the appearance of power and control. This book (maybe it was Lean In?) suggested we fear what others will say or think if we put ourselves first, or on top. Don’t be intimidated by little ole me, we say with our we-ing and us-ing.  I know my place. I’m not too big for my britches. I’m not more powerful than you.

That feels right to me.

I also personally feel more connected to us versus I. I’m one of four kids. We’re part of a huge family. That family did things together, always. The spirit of my upbringing was one of community, not individuality. But that was basically the whole ’80s and ’90s. We are the There’s No I In Team generation. Or we were until the point that iPhone invented the selfie.

I don’t think this we v. I is the end of the world, by any means. But I think what’s underneath it could use some examining.

How can you advocate for yourself when you don’t think that self should show up all that much? This is a town where people want to know who you are what you’ve done and why they should trust you to do it again, with their money. And that is not a bad thing. Being in charge is something you earn by having the ideas and doing the work. So if you’ve done it, you’ve earned the right to say this is me and this is mine. And that goes for any industry, in any town.

I’m going to try to do more of that moving forward. You try, too. And when it feels weird – which it already has for me in the 24-hours since I made this grand commitment – try to figure out why.

What are you trying to diminish when you we instead of I? And what about you is getting diminished in the process?