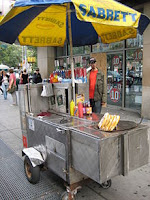 I’m not saying it’s a hard and fast rule, but I do believe the weirder the places you put yourself in the greater your chances are of meeting someone – case in point the guy I met at a hot dog stand at 3:00 in the morning.

I had been out with some friends on the Lower East Side – Libation I think – for one or too many vodka tonics (my then drink of choice – I’ve since switched to soda on account of the popularity of skinny jeans). I had to go to the bathroom because I have the bladder of an 8-month pregnant woman, so I went wandering around downstairs looking for one. I found it, went, and then somehow walked out the front door of the bar. I have no idea how this happened. I can assume from my state of mind (or lack there of) that I thought the front door was the stairs back to the dance floor. This has happened before.

Once on the street I decided I may as well go home. Again, these are assumptions. It is entirely possible that I had another destination in mind. No matter because on the way to wherever I was headed I smelled hot dogs.

I, like most people who claim to be grossed-out by hot dogs, love them. I take mine with saur kraut and brown mustard, exclusively. Of course drunk at 3:00 in the morning I’d take it any way it came.

And so I proceeded to sniff around the dark and unsavory streets of the Lower East Side looking for the source of this hot dogs smell. Luckily the source was actual hot dogs. I found them somewhere shockingly far from where I began (apparently when the sense of logic is dulled the sense of smell is sharpened). At said hot dog cart was a very attractive man, naturally. I must have approached looking like a crack whore hoping to score, because he said something like, “wow, you look like you really want a hot dog! Let me buy that for you.”

This is where my theory comes in. See if I had simply been in a subway car with this guy or inside a store or sitting on a park bench he would have had no prompt to speak to me. It was because I was a laughable disaster in an already hysterical environment that he had an opening line — a meet-cute as the 1950’s filmmakers would call it.

They didn’t have saur kraut but I wasn’t about to refuse a free hot dog from a perfectly good-looking man. I believe we stood there for some time as the vendor (a man whose version of this story I would kill to hear) prepped the dog because we somehow grew comfortable enough with each other for him to ask for my number and kiss me. Yes, hot dog in left hand, high-heeled foot dangling off the cracked, concrete curb, I kissed a boy at a late night food cart.

But again, it was because of the very bizarreness of the situation that the chain of events occurred. I’ve had similar luck standing and watching the trapeze school that used to be outside Hudson River Park (“so, are you a trapeze artist or just a fan?”) and at the New York City Transit Museum (“so, what’s your favorite subway line?”) leading me to believe that the stranger the circumstance, the more natural the conversation. Ironic, but somehow still logical.

And no, sadly my hot dog man never called. Apparently you’ve got to kiss a lot of guys at hot dog stands at 3:00 in the morning to get a prince.