It is my life’s goal to determine if drunk thoughts are real thoughts.

My dry cleaner offered to set me up

An argument against reason 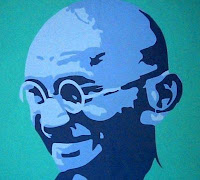 We watched a video today as part of the new hire orientation at my new company. It was a 20-or-so minute sizzle reel highlighting the company’s accomplishments, goals, and perks – a multi-media pep rally of sorts (they’ve clearly got my number).

Throughout the video are clips of a speech given by the CEO marking the launch of a new mission slogan: Next Thing Now. In it he says a lot of things about cultivating talent and thinking outside the box – typical CEO-of-a-media agency stuff.

“In order to do all of this,” he said, “to really be innovators and movers and writers of the future, we cannot be reasonable.” The he said it again for dramatic effect. “We. Can. Not. Be. Reasonable. We must be unreasonable because it is when we are unreasonable that we force change. Ghandi, Martin Luther King, Mother Theresa. These were not reasonable people. We need to be them.”

(They sell moleskins at most major stationary stores. For now just write it on whatever is available)

I’ve had my fair share of experience with “unreasonable.” When I was three I insisted on wearing the same peach party dress every single day for six weeks. They would hide it. I would find it. They would reason with me. I would throw myself on the ground and bawl ’til they gave in. Later in life I launched a small internet company with zero business plan or foresight and attempted to date some of the most inaccessible men for some of the most embarrassing lengths of time.

So it is with good, solid history that I approach my march toward adulthood with reason in my mission statement. It is the theme of two of my five listed Facebook quotes.

But it’s hard to argue with the Ghandi thing. Same for MLK, and Mother T not to mention every other person of significant positive social, political, business and fashion change. They metaphorically launched small internet companies without a solid business plan – then they followed all the way through.

There are moments when in order to be truly great, we must be unreasonable – pushers of envelopes, jumpers off cliffs, askers of the tough questions.

Why go for great? Because a life goal of “just okay” seems like a real waste. The question isn’t why – it’s when.

When is it worth it to throw ourselves on the floor and bawl it out if that’s what it takes and when is it time to call our tough-love friend to talk us down from the ledge?

I don’t know. The video ended there.