Are people still being stood up? 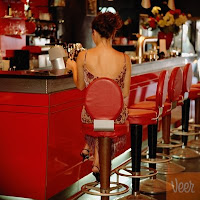 Geanna brought it up first. “I wonder if people are still being stood up…” she said.

I had to stop and think about all the dates my friends had been on in the past few years. Then when that proved futile I had to think about all the dates I’d seen recounted on reality television in the past few years. No — no one was stood up.
Could it be true that people no longer just don’t show up to a date? No one makes a plan to meet somewhere then forgets or blows it off or — in blind date scenarios — sees the girl/guy and aborts mission?
I asked around and came up with similar information. Few if any people have friends who go on dates, but no one could recount any story lines from reality or scripted television in which someone is stood up. Movies, maybe, but everyone knows movies are fake.
So if people have stopped standing people up then why? First, I guess, why were people standing each other up in the first place?
So then if we evaluate each former issue from today’s perspective we find that:
And so it would seem that it’s entirely possible that the concept of being stood up has gone the way of the blind date. This of course means that if you do find yourself in the terrible position of having been stood up in this day and age you’re even more screwed that you would have been years ago.
Before, being stood up could have been a simple issue of crossed wires or terrible traffic. Without a cell phone any 20 minute mix up could result in a stand up. It wasn’t necessarily that the person decided against you. It could all be saved with a simple explanation.
Today you’ve really got to work at standing someone up. Barring any legitimate tragedy, you’ve got to care so little that you don’t even text a lame excuse to get out of it. I suppose there are circumstances in which you could get so black out prior to a date that you’re incapable of going on the date, but then how much did you really care about the date if you drank that much before going…? The answer would seem to be, not enough to actually go on it.
I think that’s it. I think it’s officially over, and if it isn’t, it really should be. If you’re going to be that much of a dick not to show up then at least go all the way and lie to me about why.