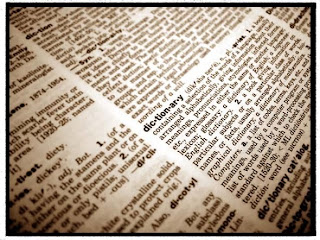 A noun in all circumstances (right?), but used in three different scenarios for three very different people. The first: a gay man in the first few weeks of dating someone new; the second a straight, female seasoned in the dating department; and the third a straight female venturing into the online dating pool. All are highly intelligent people with a strong command over English (and in one case Spanish) vocab, and yet I think they may mean three very different things.

I decided the easiest way to start the decoding process would be to take out the term self-preservation in each of their sentences and replace it with other words that attempt to provide a clearer meaning. And for these incredible detective skills I’d like to thank the producers of the robbed-from-critical-acclaim CTW program, GHOST WRITER (in which I may or may not have appeared as Extra #32 in episode #19).

(Not that many options for this one).

(Better, but not great.)

(I don’t know. Those sort of all feel the same).

So we’ve determined that self-preservation means covering your ass, protecting yourself, and maintaining your dignity. In essence, doing whatever it takes to get the least amount of hurt. It is the way many slash most of us go about our dating lives. We do not wear our hearts on our sleeves, we do not take massive leaps of faith, we do not let people walk all over us. We are – of course – concerned with taking the necessary steps toward finding the right person, but when those steps start to jeopardize persona numero uno, we run a strong defense.

Phrase: defined. Proper usage: I’m afraid that part is somewhat confused. See there are times when it’s appropriate to run the self-preservation play and there are times when that self-defense spirit is preventing the game from being played at all. In short, you can preserve yourself too much. Here are my thoughts and examples on the matter:

Having tested out each and one of these examples over the course of my own dating adventures, I can tell you that the corresponding advice is accurate.

So preserve yourself, by all means. No one knows you better, and no one has your best interests more in mind. But when that word that could replace self-preservation in your dating scenario sentence could be, wearing a metal shield; making myself completely unavailable; or playing very confusing games – things shift from self-preservation to self-prevention. And that’s not a hyphenated compound word that’ll serve you well in the dating world.