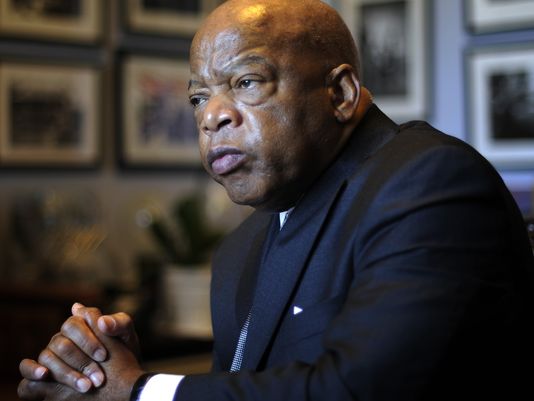 When news hit that Congressman John Lewis was the latest to get the Trump treatment, I was furious. I’ve been pretty furious at a pretty consistent level for somewhere around a year, politically speaking, but this latest bully move on the part of the man people elected to lead our nation hit me harder than most. See, I am obsessed with John Lewis. I have been since the summer between my junior and senior years of high school. Here is a little story that explains why.

I spent my high school days as part of a magnet school within a public school. We were called the International Studies Specialized Learning Center and our course of study focused on history, government, international relations and political philosophy. Yeah, it was real nerdy, and I doubled-down on it by spending my nights and weekends devoted to a club called The Junior State of America – the largest student run, government-focused organization in the world, a’ thank you very much (JSA! ALL THE WAY!).

JSA offered a four week summer program at Georgetown University where you took a college level course, participated in a mock debate program and heard from dozens of speakers ranging from press secretaries to senators.

I babysat my ass off to attend that program. Long before I aspired to be Nora Ephron (ha!) I was pretty convinced I was going to end up Madeleine Albright (HA!). Politics was my intended life and this program was four weeks of pretending to live it, complete with business casual attire and those special name tags you wear on a lanyard. God was it cool…

My best friends Michael, Rachel and I all got accepted into the Georgetown program the summer between our junior and senior years of high school. This was no surprise as we were very high up in the JSA organization, but I think they maybe accepted all the 16-year-old kids who wanted to spend four weeks of their summer writing a huge paper about Abraham Lincoln and listening to old people talk about the three branches of government. Either way, we made it, and I was over the moon.

My favorite part of the whole program quickly became the speaker series. If for some odd reason I didn’t end up Madeleine Albright, I was going to be a major political speech writer. Like all 16-year-olds, I loved hearing skilled speakers address a crowd and the JSA line-up included some heavy hitters.  Twice a week (I think?) we lined up outside the New South dorm then loaded onto buses headed for the Old Executive Office Building aka the OEOB aka Who’s in OEOB? Yeah you know, me! Who’s in OEOB? Not everybody! We wore a special name tag on a special lanyard that said that, hence the song. It also said MAIN EVENT, which we had a 1,000 jokes about, which I can’t remember because they weren’t funny.

Michael, Rachel and I developed an early strategy for ensuring we ended up in the very front row of the audience every single time. This infuriated the tiny, blonde man who ran the program, Andy. At that time I thought Andy was in his mid 40s. In reality I think he was 22.

Anyway, on the day that Congressman John Lewis was set to speak we decided to let it go with the whole front row charade. We’d seen all the coolest people from that spot already – Dianne Feinstein (swoon), Barbara Boxer (double swoon), Paul Wellstone (RIP), and Ken Starr (vom, also am I remembering that right Michael/Rachel??). I will confess that I didn’t know who John Lewis was before the day I met John Lewis. I hadn’t read ahead in the speaker bio pack. I was too cool for that.

So I saw John Lewis speak from a regrettable five rows back, but it didn’t make a difference. It felt like he was holding my shoulders and yelling straight into my face. In fact, I just wrote that I met John Lewis but we didn’t actually meet; it just felt like we did.

I remember three things about the speech that John Lewis gave – well, four if you count his booming, gravely, baritone of a voice.

The first is the way he says the word chicken.

He opened his talk by telling a story about the chickens in his mother’s yard growing up in the south. The chickens…those chickens…her chickens… He took a full five seconds to say chiiickeeennss. I think he was maybe even joking about whatever theeee chiiikeennss were doing, but he made it sound like they were the greatest species on earth. I can’t hear the word chicken without re-hearing it in my head the way it comes out of John Lewis’s mouth. Michael and I repeated it over and over and over again for months. If chickens could hear the way John Lewis says chicken they would rise up and revolt.

The second thing I remember is that John Lewis delivered the greatest speech I’ve ever heard live, and I didn’t even realize he was giving a speech.

He got up there and started telling this the chickens story. Then he was talking about his early days in the civil rights movement. Then he transitioned to a story about Dr. Martin Luther King Jr. before dipping into something about present politics then pivoting back to a major moment of the Selma march and eventually sharing something about Coca-Cola. I remember feeling like I was being guided through this insanely twisty maze where every few minutes we’d stop off to see the most fascinating and moving thing I’d ever seen and, when it was done, John Lewis revealed that we’d been walking in a circle the whole time. Does that make sense? No? Good, then you understand. John Lewis made me think about speech writing through a completely different lens.

The final thing I remember about my fifteen minutes with John Lewis is that he made me cry.

I’m not much of a crier. It takes a really powerful scene/moment/experience/So You Think You Can Dance routine to choke me up. And, even then, I feel the tears coming and keep myself in check. I don’t burst into tears.

Last week I got choked up watching Michelle Obama deliver her final speech. I saw the emotion in her eyes and the eyes of the people in that room. The very true and important things she said made me feel grateful for her and sad for our country. I could picture myself in her shoes. And so my eyes welled up. It was a thing that built.

When John Lewis made me cry it was instant. I didn’t see it coming. I didn’t feel the build. I was fine and then tears were streaming down my face as if he Harry Potter-spelled me. It was the section of his story/speech/talk where he delivered a portion of I Have A Dream. He was talking about something relevant to civil rights and then suddenly he was doing the world’s greatest MLK Jr. impression – except it wasn’t an impression because those words were his words, too. I wish I could remember which section of the speech he repeated. I want to say it was this part:

I have a dream today!

This is our hope, and this is the faith that I go back to the South with.

Those are powerful words and they would have an impact no matter who spoke them aloud, but there was something most powerful about the way they felt coming out of the mouth of John Lewis. He delivered them with a level of authenticity that was transportive. It is very hard to feel what another person is feeling. We can know that someone is hurting or confused or joyful but we don’t feel that same hurt, confusion and joy often. I think maybe you can when you’re a parent? My mom used to say that she felt our pain.

That day, in that room, from five rows away, John Lewis took what was in his heart and shoved it inside mine. It was instant. It was powerful. And it made me cry. If this sounds a little dramatic then I’m underselling it. It was magic.

I wonder what would happen if John Lewis got the chance to speak directly to Donald Trump – to hold his shoulders and yell straight at his face. I wonder if it would have the same impact on Donald as it did on me. I am sadly not that hopeful.

As for me, I didn’t end up the Secretary of State (yet?) and I’m not a political speech writer (today…). But when I write or perform I try hard to make people feel exactly what I’m feeling. I believe that’s how we form connection, and I believe connection is how we overcome difference, and lord knows there is a lot of that work to be done.

As for John Lewis, I’m so curious what he will do next. How will he fight back? And how will Donald respond?

I don’t have a lot of hope right now, but somehow knowing that John Lewis is still out there fighting and teaching and telling stories about thhheeee chiiickkeennss helps restore just a little.