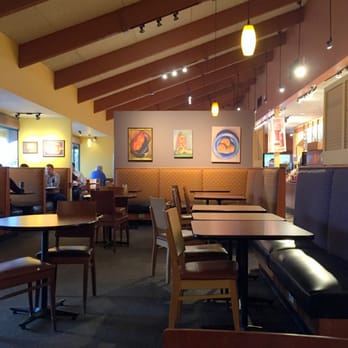 I’ve been doing these free writes as if I am Evelyn and I’m making the moves I would make in this same completely insane scenario that makes me very happy. So far I keep having new ideas of what I’d do next, hence another little post.

The group had been meeting in the back booth at the Panera Bread on West Main Street every Tuesday for the past six years. At first, Evelyn had wondered if the Panera Bread would be private enough, but it turns out nobody wants to bother a bunch of mostly old people eating broccoli cheddar soup at 11 am. They had laughed there, cried there and made a real racket every once in a while. The racket was usually Jerry’s fault. He couldn’t seem to make a point without shouting it.

Today, though, no one was laughing or crying or yelling. They were silently listening to Evelyn with their eyes, and some of their mouths, wide open.

“So please understand that you do not need to participate,” Evelyn finished. “This is completely and totally voluntary. But I do have to ask that if you say no, you don’t tell a soul about what I discussed with you here today. Because, I won’t lie, those of us involved could go to jail, possibly for the rest of our lives.”

Lucy turned to him with desperate eyes. “Jerry please don’t do that. I keep asking you. Every week I ask. You have no idea what the real timeline is. You are not God.”

Jerry rolled his eyes. He was old – at least 80 – but he’d acted older for years, if not forever. “Old people get away with everything,” he’d say. “When you’re old, you’re finally free.”

Jerry had owned Imperial Parts out on Rt. 22 – the best mom-and-pop mechanic shop around, ask anyone. He’d built an incredible business for himself and his family, but none of his four kids wanted to take it over when he retired last year. So Jerry was very bitter and very tired, which was tricky because Jerry had started pretty bitter and usually tired.

She was the youngest of the group – maybe 60? she’d never said – and also the newest. This was one of four groups that Lucy attended every single week. She told people that it was nice to join others in conversation and community, but Evelyn thought that it had to do with Lucy being so Christian. Evelyn thought that Lucy thought that they more groups she attended the more God would notice her, and hopefully help her.

“Good,” Evelyn said. “I’ll answer any and all questions. That’s why we’re here.”

“Wrong,” Patty said, “We’re here to talk about whether we had a bad week or a shitty week. You’re here to turn us into some kind of political vigilantes. And let me say one thing, no matter who decides to join this crazy project of yours, you will not be having your meetings at our Panera booth, at least not at 11 AM on a Tuesday.”

This was what Evelyn had expected from Patty. You don’t get to be a high school principal without being a little sharp around the edges.

“Of course not,” Evelyn said. “We’ll need a much more secure location than this.”

“Ha!” Jerry said again, this time for an unclear reason.

“Alright. So what to do you think a bunch of cancer patients know about staging whatever kind of heist or hold up or take down you’re talking about?” Patty asked.

“Jerry was a mechanic,” Evelyn stepped in, “Could be helpful. Lucy used to work for the mayor of Hartford. That might be something.”

“Well, I don’t know that I’m saying yes to this so maybe don’t count me yet because I have a lot of concerns about really everything so – .”

“That’s right,” Evelyn said. “We’re just discussing. But, to answer your question Patty, I will be engaging a team of actual experts in the areas we need to make this happen. They will train us.”

Evelyn had expected another Ha! from Jerry at that moment, but instead, she got a question: “Where are you getting these experts?”

“Well, that will be my next task, Jerry. Once I know that I have a team to carry out the plan I’ll find the right people to help us get it done. Just like in Oceans 11, like I said.”

“I’ve seen that movie,” Patty chimed in. “The experts do the actual job. They don’t train some people twice their age to do it.”

“Well that one guy is an old guy,” Jerry said. “The guy who did Dick Van Dyke.”

“Carl Reiner,” Patty said. “Not the point. The point is, why aren’t your experts going to do your job, with you. Why do you need us?”

“Because we’re dying of cancer.”

Judge had been a lawyer, one of the first black lawyers in all of Fairfield County back in the ‘60s. He went on to be a judge, hence the name. For the past six years, he’d presided over this group. He was the one that broke up the spats and calmed the criers and looked at your blood work if you were confused by your blood work. If Evelyn was the unofficial mom of this group, Judge was the very official Dad.

“Wait. What do you mean by that?” Lucy asked.

And with that all the eyes shifted back to where Evelyn was sitting, at the bottom of the U of the giant Panera booth, trapped.

“Well….Judge is right. I’m asking you because – well – there’s no better way to say this and I know you can handle it – you’re dying. We’re dying. Yesterday Dr. Jackson told me I have about six months left. Jerry, you heard nine, three months ago. Patty -.”

“Right. So there’s that, plus I know how you all feel about what’s going on with guns in this country. We’ve all known people or lost people close to us with Sandy Hook. So I thought if anyone would be willing to spend their remaining days doing something of real, true value with their lives, it would be you.”

“Because we have nothing to lose,” Lucy whispered.

Then they all turned to Judge for his version of the same reaction.

Read Part II of the story.

Read Part I of the story.