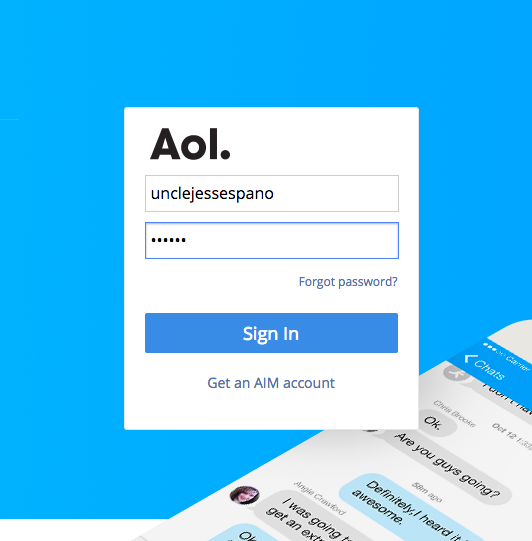 Sometime in the spring of my freshman year of high school I sat down with the big glossary of musical terms that we kept in the living room and started the search for the perfect AOL AIM screen name.

I needed the perfect name. I wanted it to be evocative of my entire self (duh) but also great sounding and completely unique and deeply meaningful for years to come. At the time, playing the piano and dancing were my things so the giant music glossary in the living room felt like the right source.

After an exhaustive search I landed on the perfect term: Chaleur: adv. from the French meaning, “to play with warmth.”

How great sounding… How unique… How deeply meaningful… How…me. I played with warm. I was warm. I liked the idea of pronouncing something in a sexy French way every time someone asked for my screen name, even though I took Spanish.

I slapped a 27 on my perfect find (b/c that was my favorite number. Chaleur’s 1-26 were obviously available) and called it a new identity.

Chaleur27 was intense. She attended this magnet school for International Studies and she was in it to win it all. She studied like a fiend, called Madeline Albright her idol and took herself about as seriously as a teenager can.

IM in high school was mostly used to chat about homework and Will & Grace episodes best friend Monowin (a brilliantly simplistic take on the Walt Disney World Monorail and, if I’m not mistaken, winning?). Chaleur had her own phone line – like all the most sophisticated French girls, but IM was completely and totally private. Like, you could curse.

[Or did we call it AIM? Or maybe A-I-M? I can’t remember because it was TWENTY YEARS AGO.]

Senior year Chaleur27 landed her first real AIM romance. He was a junior from Boston that she met during a summer program. Every single day she’d rush home from school, sign on, and countdown the minutes until he went from idle (those taunting zzz’s) to active (it just went from grey to color, right?). Ugh that feeling…

Do not tell me that falling in love over AIM is the same as falling in love over text because you are wrong. It is different. Sorry, better. You had to sit there on the desktop computer that was only inside your actual bedroom if you were incredibly rich and type words back and forth, and only words. No emojis, no GIFs, no hyperlinks to YouTube videos. It was as pure as love gets and if you missed it, I am deeply sorry for you.

Alas, Chaleur27 was off to college leaving the then-love-of-her-life-whose-screenname-she-cannot-remember.

But college meant the chance to reevaluate who she was and who she was going to be. Was that a Chaleur kind of girl? Still intense and French-ish? Was 27 still her favorite number?

It was time for something lighter, looser, more ready to have four shots of warm vodka before a really shitty house party. Something that clearly expressed the kind of creative writer she had recently decided she wanted to be. Sorry Madeline Albright.

And so I sat down with no glossary or Encyclopedia or book of any kind and thought: what’s really funny to me?

And I landed on UncleJesseSpano. It’s a Before & After, like on Wheel of Fortune.

I’ve never been cleverer than I was the day I came up with that screen name. UncleJesseSpano was a mystery in a riddle in the exact right amount of characters. And, to make matters more perfect, it was available. Fate.

They say you never get a second chance to make a first impression, but that was not true in the years of IM. You had the moment you introduced yourself (Hi, I’m Jessie) and the moment you dropped your screen name (It’s UncleJesseSpano). In my case the second impression always trumped the first.

Yeah, UncleJesseSpano. It’s a Before and After.

Omigod those are like my two favorite TV characters from growing up. That’s so genius. Hiii!

UncleJesseSpano decided she’d try writing comedic essays for the school paper. She agreed to help her friend MikeontheHeights (a combo of his name and the nickname for our campus) start a TV news program. She watched all of Sex & The City (which was forbidden from Chaleur27’s life) seven times and hosted an evening of convos about sex and dating in her dorm room, Sunday Night Sex Talks.

She really found herself and has been on that path she discovered since.

If up until this point you have thought of this piece as a light and silly memoir essay about a girl’s two screen names, you’re about to feel weird.

I am dead serious about the fact that changing my screen name from Chaleur27 to UncleJesseSpano changed my life. I went into college a Communications major with politically-focused aspirations; I left a comedy writer.

Something about owning that name made a difference. I felt confidence connected to something that came out of my brain, not my body or the town I came from or what I was studying. I didn’t have to wonder what if would take to express my cheesy, ham-inclined, left-of-center self. If you got my screen name, you got me; if you didn’t, no bigs, but good to know. If this is all sounding a little dramatic and strange then good, you’re getting me. Unfortunately, that now takes a 900-word blog post. It used to happen in 15 letters.

This morning I tried signing in to AOL Instant Messenger.

[Which I have been calling Instant Message-er for twenty years. Messenger?? Like a messenger bag not a tiny box that delivers messages???]

So in effect, I’ll never be UncleJesseSpano again.

And yet, I’ll never not be.