What would happen if you actually said, “sorry, I won’t share a bed with you until we’re in a committed relationship.”

What Makes or Breaks Your Relationship – according to 720,000 people

So this is interesting.

eHarmony – makers of ridiculous commercials and the successful matches that inspire them – has come out with a new study about what makes or breaks a relationship.

The results come from questions that service asks during their “Guided Communication process” – online daters as asked to share their relationship “must-haves” and “can’t stands” with their matches. They analyzed what more than 720,000 eHarmony members selected from a list of 50 options and put them together in what I think is a rather well-designed chart (power point junkie).

Click here to read at full-size, but I’ve pasted those very fancy charts below and included my thoughts below that. 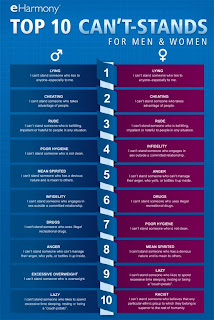 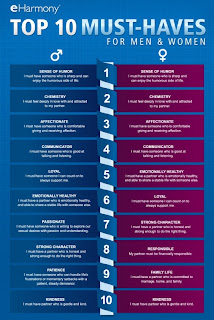 Part of me wants to get inside the eHarmony system so I can take this survey myself because results like these are always far more specific to the moment than the entire person. But all-in-all, I find them fairly accurate. What do you think?