Things I Learned on my FIRST TRIP TO VEGAS!

Hey friends – I’m taking a break from formal posts this week to crank on a feature I’m writing, but in my absence I leave you with this GEM of a website from some geniuses who appear to be male.

It’s as simple as the graphic suggests. You post his text, and the “bros” at HeTexted.com reply with the meaning. Why it’s taken this long for the Internet to make this happen is beyond me, but I’m glad they decided to release it in fuchsia now that it exists. Really pops!

In general I support this for purposes of comedy, but I do warn that one of the “bros”is named Mason, and his picture features him in sunglasses and a blazer, and the other is Ben who appears to be 15 years old. Also, instead of posting actual responses to your questions of “what does it all mean??” they just feature buttons that I assume other bros reading the website push in support of he’s into you, he’s not into you, or verdict is still out. We all know a text message response is far more nuanced than just that, right? (that’s not rhetorical Mason and Ben).

So – go have some fun with the site, and please report back on your findings. And thanks to Michael for the website tip.

Also – see what I mean about Mason and Ben? 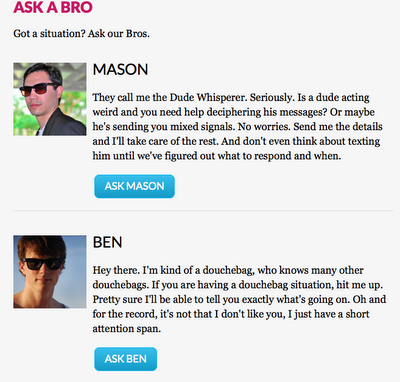