Thank You and Goodbye…For Now 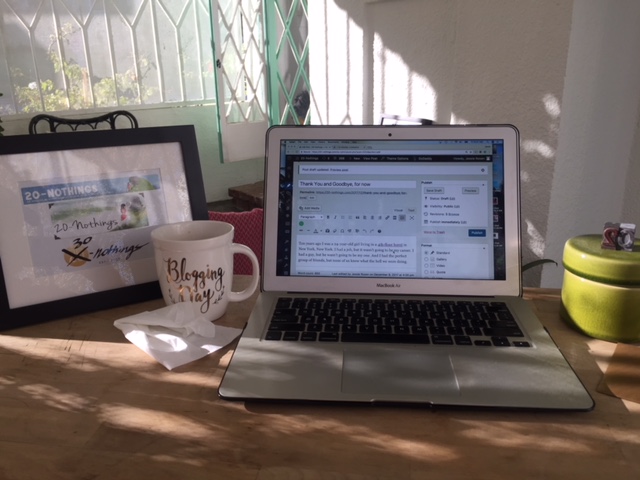 I felt lost. I felt anxious. I felt very confused about how to ever pay off a credit card bill. I felt like the whole world wanted to critique my obviously wrong lifestyle while I ran around updating their spreadsheets and getting them coffee.

I feel stable. I feel confident. I feel like I could stand to put a few fewer things on my credit card… I feel like I don’t care what the world thinks of me and my lifestyle. I haven’t made a spreadsheet in years, and I get my own damn coffee.

But even though I am so far – in both distance and time – from that girl who started this a decade ago, my eyes see the world the same way that she did. I know that because I’ve spent the past week reading through this entire blog.

I stopped to re-read a few favorite posts.

The one I wrote when I left my job to be a full-time writer.

The way-too-long long series about my dry cleaner trying to set me up (and succeeding, but ultimately failing).

The post I wrote when I left New York for LA.

The essays in remembrance of the three grandparents I’ve lost: Poppy, Mommom, and Poppop.

This completely ridiculous Girlfriends Guide to Star Wars that I’m oddly proud of.

The post that I wrote introducing R, and then explaining why I was going to marry him, and then talking about my feelings on that very day.

And then I read all ten birthday posts (which is narcissistic enough without linking to them).

But I saved my favorite for last. This one: On Monday, A Metaphor.

I wrote it a year or so into blogging. I remember it was a tough time for me. It had taken me so long to get a first job, which I hated. I was at a second job, which I was not loving. I knew that I wanted to be writing, but I couldn’t figure out how to make that happen, or what it would even look like if I did. Fueled by those feelings, I wrote the first really vulnerable thing I’d ever written and, after a big internal debate, published it.

I think that post marks the first time that I really found my voice as a writer. That’s why it’s my favorite. And, though only a few (slash the best) people will get this, every time I re-read it I touch my cheeks and say, there you are Peter.

It is a special and powerful thing to see yourself. To find your true north. To feel like you’re not a nothing. And that maybe, if you keep chasing that feeling of you, you could turn into the something you’ve always wanted to be. This blog has given me many gifts, but the discovery of the path to myself is the by far best one.

The answer is the thing that started it all.

That is what I learned after one thousand, one hundred and thirty-three posts. I can always write my way back to me.

My wish is that each and every one of you will make that same discovery. That you’ll find the thing that makes you feel found.

It may be the thing that makes you money, it may not.

It may be the thing your family wants, it may not.

It may take you two or ten or twenty-five years to figure it out, but I say go for it. Go big. Put your whole heart in. Get real dramatic about it. Wear special outfits and get a special mug and design a logo, and then two more.

I now know that for a fact.

And I want to thank you from the bottom of my blogging heart for making it possible for me.

Signing off, one last time. But don’t think for a second that I don’t already own the domain names for 40 and 50-Nothings, so far. Just in case…